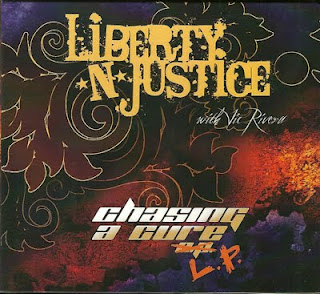 As usual, Liberty N Justice is Justin Murr and a bunch of folks who are a lot more famous than him!

A few months ago, Justin Murr released the Chasing A Cure EP to raise awareness and monetary funds for The Epilepsy Foundation, as Murr's 12 year old daughter, Trinity Page Murr, has been fighting the disease for several years and has even undergone brain surgery in an attempt to free her from the seizures associated with the disease.  All of the artists on that original EP donated their time and efforts to the cause, and in an attempt to maximize profits for the foundation the album was released in digital-only form.  Around this time I spoke with Justin on the phone and suggested he get in touch with another friend of mine, Bill Bafford at Roxx Productions, to see about putting the album out as a CD to help raise even more money and to increase its availability.  Just a few months later I hold the finished, expanded, limited-edition results in my hands!  (For the record, I take ZERO CREDIT for having anything to do with this project other than putting a bug in Justin's ear...Bill and Justin did all the work here....)

The first five tracks are exactly as they appeard on the digital EP.  Paul Shortino and Ron Keel lend their massive voices to the lead track "Say Uncle", a song about finally giving in, letting go, and letting God take over by "saying uncle".  This track also features a very nice solo and outro from Twisted Sister guitarist, Eddie Ojeda.

When I first spoke to Justin about this project, he told me that he thought Enuff Z Nuff's Donnie Vie may have been the "M.V.P. of the project", and Justin may have been right. Donnie is in excellent form on the track "Throwing Stones", which also features King Kobra guitar-slinger, JK Northrup. This is a nice mid-tempo rocker, again featuring smoking little solo in the middle and an incredibly catchy chorus. While probably a bit blusier and more modern than anything most Enuff Z' Nuff fans will recall Vie working on in the past, I think this is a style that suits him extremely well. This song is as radio-ready as it gets, and I would love to hear this get some airplay somewhere.

"Paige's Song", was written it tribute to Justin's daughter, and is a big piano-driven ballad featuring the talents of Philip Bardowell on vocals and Tony Palacios of Guardian on guitar. I love Bardowell’s voice, and I think this song really showcases his power. This is a moving track, and you can tell that Justin was pouring his heart out on this track, talking about fearing that he would lose his “angel”.   He also writes about that special feeling a father gets the first time he holds his child and how we, as fathers, always promise nothing will hurt our kids, even though deep down we know that there are often things which we hold no control over. As a father myself, I found this track particularly touching, especially when looking at my own son.

“Playing God” features Terry Ilous of XYZ on vocals, along with Jeff Paris and Richard Kendrick of Near Life Experience. I’ll be honest, the very first thing that pops into my head when I hear the opening chords of this song is Bob Seger! Something about the piano and the guitar sound just makes me think of Seger…but once Ilous’ vocals kick in on this melodic rocker, the comparisons come to an end. After talking with Justin about this song, I really like where this song is coming from lyrically, as  I think so many of us will admit that we have struggled with our faith from time to time and attempted to do things on our own and make our own miracles happen. A very open, honest song that I think we can all relate to on some level.

The final original EP track is the title cut, "Chasing A Cure“.  Benny Mardones turns in a powerful vocal performance and Firehouse's Bill Leverty adds a nice solo to this ballad.  Again, I think there are many ways to interpret the lyrics here, whether speaking simply of chasing a cure for epilipsy, or seeking a cure for all of mankind's "ills", and I think a lot of people will be able to relate to this track when they give it a listen.

On this newly expanded LP version of the album, Justin teases his fanbase by giving them hints of the upcoming LnJ double disc release.  Two cover songs are included here, one which seems logical, one which seems completely out of place.  Skid Row's "Quicksand Jesus" is handled very well by Kelly Keeling on vocals and is a nearly dead-on performance of my favorite Skid Row ballad.  On the flip-side, the inclusion of Michael Jackson's "Black Or White" will set a lot of people to scratching their heads, but it works surprisingly well...up until Justin gets hip-hop-happy one more time and includes a rap from D.O.C.'s Alton Hood.  Apparently he didn't learn from his previous rap-disaster on an earlier LnJ album!  Nowhere near my favorite moment of the album, but Ilous handles the non-rap portion of the vocals and Northrup rips off a nice little solo and handles the poppy guitar riff perfectly.

Also teasing the listeners is the track "Butterface", which is a sampling of the more modern rock-sounding original tracks that will also be included in the upcoming LnJ double disc release.  I'm not going to give away the meaning of the title, but I will tell you that Justin manages to snag a MONSTER of a guitar player here in Joshua Perahia.  Again, it is not what you are used to hearing from the generally straight-80's sounding LnJ, but listen to it with an open mind and I think most people will be pleasantly surprised.

Probably the most unique song on this album is "Ground Zero", a huge, progressive track featuring none other than Kerry Livgren of Kansas fame, Carmen Appice on drums, and Kelly Keeling on vocals.  This is, not surprisingly, a very Kansas-esque prog-rocker that simply has to be heard to be appreciated.  Initially, I was not a fan of this track, but the more I listen to it, the more I can appreciate the intricacy of the material and the beauty of the performances here.  Livgren is in excellent form here, tearing through a HUGE, minute-long solo, and I don't know that I have heard Keeling sound this powerful before.  Just an excellent, multi-layered and textured track that adds an entirely different dimension to this album.

"Snake Eat Snake" is a plugged-in version of a song that Reeves and Webster, both of Neon Cross, had contributed to the Independence Day release a couple of years ago, and "Eve" and "Damascus Road" are demos of material that had not made previous releases, with "Eve" being a modern-sounding up-tempo rocker and "Damascus Road" being a piano-driven power ballad.

And while it is not the last track on the disc, it is the last one I will mention..."When Mullets Ruled The World" is a smirk-laden ballad about the hairy excesses of the 1980's and early 1990's.  Check out the video link below to be time-warped back to the days of Aqua Net, spandex, leather, hot chicks, and guys who tried to look like hotter chicks!

When Mullets Ruled The World

I’m unsure who did all of the bass and drums for the album (I’m assuming Justin did the bass), but the backbone of the songs is solid throughout. The same can be said for the places where keyboards are added in.  Vic Rivera of AdrianGale/Crunch contributes heavily to the songwriting to this album (his name is actually featured alongside Liberty N Justice on the cover), and I believe he also supplies the vocals to both "Eve" and "Damascus Road".  Line Of Fire’s Shawn Pelata also getting writing credits on the title cut of the album. While perhaps a bit more commercial than some of the songs previously offered up by Liberty N Justice, and predictably disjointed with the inclusion of multiple styles of rock on one album, there are really no weak songs here at all, and certainly nothing that would deter any fan of the project or any of its contributors from picking up this album.

My few issues with this album are minor.  As I have repeatedly noted, I hate digipacks, which this album is released in.  There are no lyrics included, which is always a bit of a bummer for me, and there are no photos of the contributing artists.  Also, the track listing on the back of the cover is incorrect, as "Throwing Stones" is actually track 2, not track 4 as it is labelled, which then throws off the order of the first three songs when you are listening to them.

My version is the pre-order version which came with a cool collector's guitar pick that I think my son has wandered off with!  People wanting a copy of this album need to hurry, as there are only 500 copies of the CD being pressed, and they are sure to go quickly, not only to fans of Justin's work with LnJ, but also to fans of the contributing artists.

For more information about Epilepsy, or to make a contribution, please visit Epilepsy Foundation.

Back To Reviews Index
Posted by arttieTHE1manparty at 5:55 PM