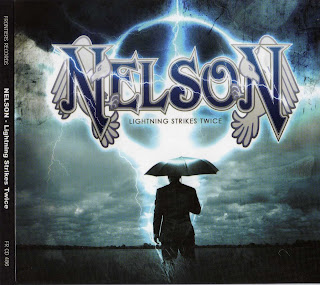 From the very first note of the return album from the Brothers Nelson, one thing is apparent:  this is the album that should have followed up their massive hit debut After The Rain.  It has been ten years since they released anything, but more than 20 since that debut, and this album is a major timewarp back to their radio-friendly, pop-tinged hard rock sound that had Matthew and Gunnar loved by most women and despised by most men.

After a couple of flop follow-ups, a change in name (they called themselves The Nelsons for a bit), an attempt at country, and a recording of their father's music, the twins find themselves back where they started, churning out melodic, catchy, hook-laden material that would have definitely found a home on MTV (if they still played videos) and radio (if they still cared about this kind of music).  The guitar duties have been fully taken over by Gunnar for this album, and he handles the chore remarkably well, even pulling off some tasty, if not overly difficult solos scattered throughout the tracks here.  Likewise, Matthew is more than competent in his handling of the bass lines here, and the sibling harmonizing has never been smoother or tighter than it is here. Other than the brothers, however, there are no remaining members from that multi-platinum debut, which perhaps makes the overall sound and feel of this record that much more impressive.  It is performed very well and, for the most part, is written soldily as well.

Favorite tracks are the album opener, "Call Me", the latin-tinged "How Can I Miss You?", the cruising-music sound of "When You're Gone", and the ever-so-slightly modern sounding "Kicking My Heart Around" (not the Janis Joplin track).  Additionally, "You're All I Need Tonight" sounds like it was written as the follow-up track to the huge hit song, "After The Rain", and "Come" has a bit of attitude to it.

The album is not without a few bumps in the road, however.  The big ballad, "To Get Back To You" just doesn't work for me with it's sparse arrangement and string section.  "Take Me There" is another slower track that comes off sounding a LOT like a Bon Jovi filler track.

There is nothing earth-shattering or ground-breaking here, but fans of the band will get exactly what they are likely expecting from a Nelson disc when they pick up Lightning Strikes Twice.  In fact, a lot of people may wonder why this album is even included on this review site, since it is not sleazy or overly glammy.  In all honesty, it was sitting there in the stack, so I snagged it and popped it in and gave it another listen.  And, to be fair, I have heard a lot of music lately that is far worse than this latest offering from Nelson.

Rating:  For a change of pace, there is no harm cranking this to 7, although guys might not want to tell their friends!

Back To Reviews Index
Posted by arttieTHE1manparty at 5:36 PM