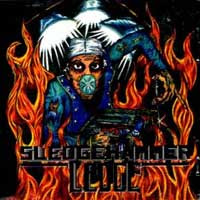 A friend of mine gave me the four song indy release/demo from this band called Legs Up several years ago, and I was immediately hooked!  I had to find out if there was something else out there that I could get ahold of because I hadn't heard anything like this come out of the grunge-infested mid-nineties and I needed more!!!  Needless to say, I was very happy to find that the band had changed their name to Sledgehammer Ledge and had just released their full-length debut.

To describe the sound of Ohio's own Sledgehammer Ledge, I always tell people to take a blender, put equal musical parts W.A.S.P. and Lizzie Borden in, add a splash of insanely pissed-off Sebastian Bach, and then garnish with the shouted gang vocals of Warrant...on steroids.  I really can't think of a better way to describe these guys.  The band never managed to find a major label that was willing to package the angry, sleazy swill that Sledgehammer Ledge was offering up, and it is their loss, as this is easily one of the best independent releases I have ever stumbled across.

There is literally no sense in breaking this album down track-by-track, as each song is delivered with a blistering, in-your-face approach by Childs, regardless of if it is the anthemic opening track "Wake The Dead", the pulse-pounding "Salute The Trash", or personal favorite, the scorching, angst-drenched "On And On", with its chorus of "Lie, Steal, Cheat, Rape!"  Even when the band decides to slow down, such as on "Billy", there is no let-up in the anger that Childs unleashes on this disc.  Don't let the angry descriptions steer you away from this band, however, especially if you are a die-hard sleaze fan, because this album drips with spit and snot and sleaze throughout.

I never got the chance to see Legs Up live, but I have been told that "Lock Your Door" is a song that followed the band through both incarnations, and it is a solid track.  "No Heart At All" is another slower moment, but don't take that to mean plodding power ballad, because that simply isn't Sledgehammer Ledge's style at all.  As I said before, even the slower numbers pummel the listener with huge, angry guitars, Childs' incessant snarl, and a thunderous rhythm section that just never relents.

People are going to love this CD or they are going to hate it, in my opinion, as the band really leaves no room for luekwarm sentiments.  You either get where they are coming from or you don't.  However, if you are a fan of W.A.S.P. or the heavier underbelly of Skid Row, I can't fathom how you wouldn't love this disc!

Rating:  Crank this slab of molten, angry hariness to 8.5!

Posted by arttieTHE1manparty at 3:44 PM