LIBERTY N JUSTICE "Light It Up" 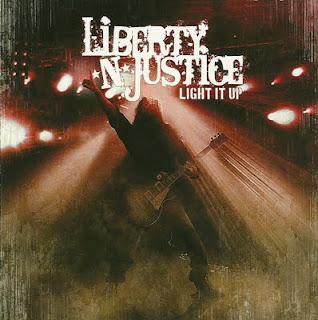 In 2010 Liberty N Justice returned with their fourth all-star line-up album (fifth if you count the Best Of release) and put forth some of their best work yet. While there are several returning guests tackling Justin Murr’s writing on this newest LnJ disc, it is the newcomers that particularly grabbed my attention right from the start. The title track is supremely snarled by LA Guns’ Phil Lewis, and drips with the attitude and swagger that fans of that band will recognize immediately. The sleaze drips from the guitar tracks laid down by JK Northrup of King Kobra and XYZ fame, and Lewis puts forth possibly his best vocal performance since the band’s Hollywood Vampires days, which says a lot coming from an LA Guns fan!

Lynn Louise Lowry, the current vocalist for Vixen, is another newcomer to the LnJ fold, and she does not disappoint with her contribution to “Blink”, a slick, up-tempo number, reminiscent of Vixen’s earlier, poppier, hair-metal sound, not the darker sound they returned with a few years ago. While certainly not as edgy as Lewis’ contribution, Lowry does an excellent job as the lone female voice on this disc. Twisted Sister’s Eddie Ojeda adds some killer chops to the latter half of the track, showing off his ability outside the classic Twisted sound, similar to some of the songs he played on his solo disc.

Quite possibly the stand-out cut on this record is the contribution from CJ Snare and Bill Leverty, both of Firehouse. “Do What You Believe” sounds like it could have come straight from one of the band’s first three albums, and is exactly what Firehouse fans wish the band still sounded like! Excellent, excellent performance, writing, and production make this mid-tempo number an absolute standout here, and Snare’s vocals are spot on.

If “Do What You Believe” is the top track on the disc, “Uncle Sam” is an extremely close second! Featuring Sheldon Tarsha (Adler's Appetite) and Jeff Pilson (Dokken/Foreigner), this patriotic song is the most introspective look into the songwriter’s mind about the state of our beloved United States. Not necessarily coming off as “politically preachy”, this track certainly gives the listener something to ponder while also soaking in a truly killer vocal performance from a man I will have to seek out. I would love to hear an acoustic version of this track, as I think it would fit in very well with several of the other songs on the acoustic Independence Day record.

Also new to the Liberty N Justice family are Fozzy frontman and WCW/WWE wrestler Chris Jericho and Def Leppard axeman Phil Collen on the song "Best Time You Never Had". Collen gets to showcase his style a bit more here than on the last handful of Leppard discs, and this is one of the sleeper tracks of the disc.

Marq Torien of Bulletboys NAILS his shot on this disc with “Drunk Dead Gorgeous”. The anti-drinking and driving song showcases one of the most recognizable voices in the glam/sleaze scene of the 80’s and 90’s, and is a better song than nearly anything off the Bulletboys disappointing latest offering. Chris Holmes, formerly of W.A.S.P. lends a surprisingly tame, understated solo to the track, which I think accentuates the power of Torien that much more.  Meanwhile, Robert Mason, the latest Warrant vocalist pairs up with his new Warrant bandmate, Jerry Dixon, on “Greed”.  The uptempo rocker is not as heavy as some of the Lynch Mob material Mason worked with, but is still a solid number that teased listeners with what Warrant would eventually sound like with Mason at the mic.

The Poley/Rivera team of Ted and Vic give a killer performance on “Man Vs. Mother Nature”. Great song, great hook, excellent vocals…but the song with the most annoying intro on the disc!  (Give it a listen...I think you will agree....).  Kelly Keeling of Baton Rouge also returns to join up with Kerri Kelly on “Every Reason To Believe”, one of just two full-on ballads on the disc.  The other is album closer “For Better Or Worse” from Shawn Pelata (Oracle/Line Of Fire) and Stephen Chesney (Frontiers). This song brings a definite Bad English/Journey-like sound to it, and is an excellent piece of writing.

There are a couple of minor misses on this disc for me, but they are not terrible songs at all.  Pete Loran and Steve Brown of Trixter contribute, “Wrestling With God” (should Jericho have done this track???) which, to me,  is a good song with a great message, but there just seems to be something lacking.  Returning LnJ contributors Troy and Dale Thompson of Bride just don't seem to fit the overall flow of this disc, although their track “The Other Theif”  shows that Dale still has those famous screaming pipes and Troy’s guitars leave no question that this is a Bride-brothers effort.  And, as I said, there is that intro to "Man Vs. Mother Nature"...!  I also wish the lyrics to the songs had been included as the message is every bit as important as the music on any LnJ album.  While clearly written from a Christian perspective, this disc is never preachy or pushy, and I hope that the fact that Justin Murr’s writing takes a Christian stance does not deter anyone from giving this disc the well-deserved attention it should receive.

On top of all the talent listed, even more artists contributed to the making of this disc. At the risk of missing someone, the additional musicians include Chris Dickens (Mission Of One), John Pine, Eric Rango, Terry llous (XYZ), Marc Danzeisen (BulletBoys andLittle Caesar), Doug Odell (Crunch/TNA). All of this talent is brought even more into focus with the excellent work of the various producers on the project. Vic Rivera (AdrianGale/Crunch/Poley-Rivera) turned knobs and dials for half of the record, Mike Layne and Steven Brown (Trixter) each produced two tracks, and CJ Snare (Firehouse) and Stephen Chesney (Frontiers) contributed a track each. Snare also pre-mastered the disc, with Cliffy (Main Line Riders) doing all the final mastering work. As a project, the mix is stellar, with no one being buried anywhere, which is important in allowing the message of the songs to come through. The guitar tones are bright and polished, without coming off as overly sugary or drifting into mainstream pop tones.

For more information on the band and its various projects, go HERE!

Back To Reviews Index
Posted by arttieTHE1manparty at 9:47 PM