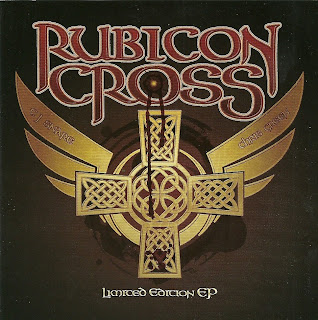 Rubicon Cross is the new "band", if you will, of Firehouse frontman, CJ Snare and his new musical partner, Chris Green.  There are ZERO credits in the liner notes, but I am going to assume that Green plays pretty much all of the instruments here, and I am almost 100% positive he is the man behind the guitars because if CJ could play guitar like this, well, we may not have heard of Bill Leverty!  To be fair, there is not much in the way of comparison between Green and Leverty as they play somewhat different styles.

This four song EP is an interesting combination of styles, with all songs co-written by Snare and Green.  On the one hand, it should shock no one that Rubicon Cross bears at least a glancing similarity to Firehouse, as CJ's voice is incredibly distinctive.  Nothing has changed, as he sings just like he does with his primary band, not changing his style or altering his delivery at all.  Personally, I think that is a great thing because I do not like when a singer goes to another band and then completely changes who he is; it's like selling me a new band under false pretenses, teasing me that it might sound like something and then not even being close.

Rubicron Cross combines that Firehouse vocal sound with a bit more modern musical approach, especially on the opening track, "Movin On".  To me, this sounds a lot like what I would expect Zakk Wylde's band, Black Label Society, to sound like if CJ sang for them.  The guitars are big, they are angry, and they bear a striking resemblence to Zakk's playing.  While still retaining CJ's vocal sound, the only way this could be mistaken for Firehouse music is if you caught that ENTIRE band on a day when they were in really bad moods!  This is an angry sounding song musically and has much more modern-sounding production than anything Firehouse has done.

"Next Worst Enemy" is not much closer to Firehouse in sound than "Movin On", although it is not quite as dark sounding in the music.  That being said, the lyrics come off as rather angry, as Snare declares "sometimes love is just one big charade" and that he has "been a victim of hit and run, serial monogamy".  I hope this is not written from a personal perspective because it is not a happy song by any means.

Perhaps not-surprisingly, "R U Angry" is not much happier, but it does wade a bit further into the Firehouse sound than the previous two songs.  Again, the lyrics take a very dark slant, asking if "all's fair in love and war, what are we fighting for?" and "How did it get to this, hatred with every kiss."  Musically, this is another very strong effort with a nice lead and some excellent solo work in the middle.

EP closer "Shine" sounds like it could have been taken off of just about any Firehouse record.  This is a far more upbeat track lyrically, encouraging the listener to "let your star shine, keep it burning bright" and that "now's the time to start following your heart and lighting up the dark".  An acoustic-based ballad, this is a very good song that I could see slipping into a graduation ceremony or maybe even a slow dance at a prom or something.  Green adds in a killer solo at about the 2:20 mark of this song that kicks the energy up a notch, really giving the song that big, power ballad feel, and Snare's vocals know exactly what to do with a song like this.  While not a clone song at all, I can hear Snare's vocals trying to sneak over to "Love Of A Lifetime" or similar Firehouse ballad.

Snare and Green handle the production, and Snare co-engineered the record as well, with excellent results.  The mix is absolutely perfect to these ears, nice and crisp with just a touch of modern production to keep it from sounding like a totally retro project.  The packaging is very basic with no photos or thank yous, but all lyrics are included.  Since this is a limited edition EP, I have to wonder if we are going to see a full-blown project in the very near future.  I sincerely hope so, as this is a great little EP to tide fans over until Firehouse does something new OR until Rubicon Cross comes fully into being with a full-length disc.  Let it be known, however, that Rubicon Cross is its own entity and a very entertaining listen on its own, and outside of the last track, there are more contrasts than comparisons between this band and Firehouse, with each band warranting a listen on its own merits.

Rating:  Crank this interesting and enjoyable project to 8.5!

Back To Reviews Index
Posted by arttieTHE1manparty at 5:54 PM