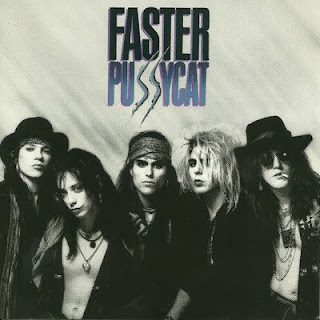 While it may not be the first album to pop into a person's head, it would be hard to find an album that more perfectly embodied the sleaze sound, attitude, and mentality than this debut from Faster Pussycat.  From the gritty, sleazy sound of Muscat and Steele's guitars to the yowled-like-a-Marlboro-cat vocals of Taime Downe, this album just sort of oozed out of the speakers leaving a sludgy trail behind.

This disc is chock full of sleaze-classics, whether cranking album opener "Don't Change That Song", sex-driven "Bathroom Wall" and "Cathouse", or the over-the-top fun of "Babylon".  But if you never gave the rest of the album a chance, or if all you own is  the greatest hits package, you are missing some of the true gems of this release.  "Smash Alley" is a gritty rocker that, in my opinion, is possibly the best song on the disc, and the last three tracks, "City Has No Heart", "Ship Rolls In", and "Bottle In Front Of Me" are criminally overlooked by most people and, despite being non-single album tracks, show more heart than the vast majority of the schlock that was managing to find its way onto MTV and rock radio at the time.

The only place this album lets me down is on "No Room For Emotion", which I have never been able to get into, and 24 years of repeated listens have not changed that stance.  Something about the song just doesn't flow with the rest of the album for me, and while I don't skip it when it comes on, I am certainly not singing along.  However, if you can only find one or two songs on an album that don't work for you, especially in today's "three singles and a bunch of crap" recording world, then you have stumbled upon a high quality release.

It's really too bad that Muscat and Downe are not even on speaking terms any longer, as there is a lot of ground that I think these two could still cover as Faster Pussycat.  Of course, Taime has decided to go in the industrial direction with his Newlydeads project despite the fact that he won the legal rights to use the Faster Pussycat name.  Muscat has struggled with his health over the past few years, and most of the rest of the band has slipped into quiet obscurity.  Guitar Hero picked up "Bathroom Wall" for one of their game releases, so hopefully this album doesn't go the way of most of the band, as even after all these years its still deserves repeated spins and exposure to the next generation of gutterpunks and sleaze addicts.

Rating:  Crank this one to 8

To find out what is happening in Taime Downe's version of Faster Pussycat, CLICK HERE

Back To Reviews Index
Posted by arttieTHE1manparty at 10:42 AM