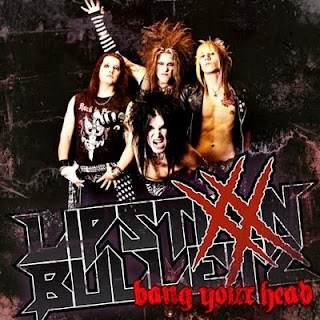 I know the first thing you may be thinking when you see this album cover:  Who stole Nitro's hair?!  Seriously...when was the last time you saw big hair that was THAT big?!  Anyway....

Lipstixx N' Bulletz is another NWoEGS (New Wave of European Glam and Sleaze) band that has improved leaps and bounds over the atrocious demo that I heard a year or two back.  That demos was so bad, in fact, I did something I almost NEVER do...I got rid of it!  Seriously, it was that bad, and it nearly deterred me from even giving this full-length album a shot.  Kind of makes me wonder if that crappy demo was the reason the band had to go to Greece to find a label like Sleazy Rider Records to put out this album.  But I digress...

Lipstixx N' Bulletz has settled into a nice groove of doing what they do best, which is putting out 80's sounding sleaze with a modern production twist.  It's very hard to say that LnB sounds like any one particular band, and that may because they sound like ALL of your favorite bands were dumped into a blender, but it wasn't necessarily the best parts that came out in the mix.  The big, gang-shout choruses are here, especially on the album opener, "Bang Your Head" (NOT a Quiet Riot cover), and follow-up track, "Rock Me" (NOT a Great White cover), although both choruses are so simplistic it makes you wonder why it took a gang to shout them.  Andy's vocals have a nice gravelly quality to them, but they lack huge amounts of range, so he settles into a lower register for most of the album, and comes off like a washed-up punk screamer when he tries to really cut loose, such as on album closer "Love In A Needle".  There are no ballads on the album, which is either a positive thing (because I'm not sure Andy could sing one) or a negative thing (because the album really starts to sound samey after about 5 songs which all have the same tempo).  The guitars are big and up front and are definitely the high point of the album, as Rikki has some very good solos and Andy's rhythm playing keeps the songs moving along well.  In fact, as a unit, the band PLAYS their music very well...it just isn't delivered very well vocally most of the time, and as a result, the listener can become rather bored fairly quickly.

So does it all suck?  No, not at all.  Personal favorites include their namesake song, "Lipstixx N' Bulletz" which has a definite Crashdiet feel to it musically.  "Wild At Heart" is where Andy's voice probably works the best and is the closest the band comes to even mid-tempo material, so there is some changeup there.  "You Poison Me" works pretty well, also, but is also the most modern-sounding track on the record, losing a lot of its 80's feel in the process.

To say that this is a terrible record is unfair, because it is not.  There are FAR worse albums out there...trust me, I hear most of them doing this review blog!  I think this band has a lot of potential, but they just are not that unique sounding and are a bit of a disappointment, perhaps because they are unfairly compared to bands like Crashdiet, Hardcore Superstar, Bullet,  Black Rain, and some of the other great bands in this glam/sleaze resurgence.  Compared to those bands, Lipstixx N' Bulletz comes off as pretty predictable and almost boring after a full album.  If the previously mentioned bands are the headliners, Lipstixx N' Bulletz are definitely the openers, albeit promisingly talented openers that perhaps just need a bit more seasoning in their songwriting.  Considering how much they have improved since that shudder-inducing demo, it is not hard to imagine that these guys will continue to improve and become that much better.

Back To Reviews Index
Posted by arttieTHE1manparty at 1:31 PM