SIXX A.M. "This Is Gonna Hurt" 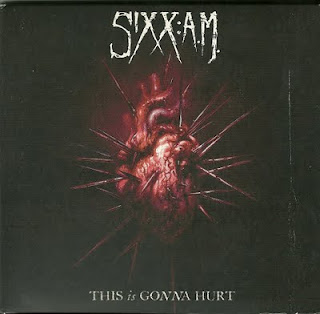 Okay, okay...the new Sixx A.M. is NOT glam, it is NOT sleaze, it is NOT hair metal, hard rock, mullet rock, bubblegum metal, whatever you want to call it.  But it IS Nikki Sixx, and that makes it worth a listen for me.

This Is Gonna Hurt is the follow-up to the wildly popular and critically acclaimed Heroin Diaries Soundtrack which featured the hit single "Life Is Beautiful", and was, as the title suggests, the soundtrack to the book of the same name.  Well, if it works once, try it again, right?  That is what Sixx and Company do here, with a new album that is the soundtrack to Nikki's new book of twisted, bizarre, dark photography which shares the same name.  The lead single, "Lies Of The Beautiful People" is also a hit single.  So has history completely repeated itself?

There are differences between this album and the band's first effort, but they are not major and they are improvements rather than steps backward.  I think this is largely because it is apparent that this is a full-fledged band now, not just a side project used by Nikki to pimp a book or to fill his time while Motley is on the shelf.  The band is obviously comfortable with each other, they feed off of each other's energy, and it works well.

What we have this time around is a bit more of a retro-sounding effort, but one that is still dark and introspective on Nikki's part.  Yes, I know the credits read that all of the band members contributed to the songs here, I think there is little doubt that Nikki is behind the vast majority of the material here, as the guy flat out knows how to write catchy chords and rhythms, regardless of the style he chooses to create those sounds with.  When I say retro-sounding, however, people shouldn't get the idea that they are going to hear a pure 1970's sounding album or an updated version of Too Fast For Love.    That's not what I mean at all.  There is no doubt, however, that Nikki, DJ, and James dug into their collective musical backgrounds and influences to come up with this modern-yet-still-heavy sounding album that is simply chock full of catchy choruses and mind-numbingly throbbing energy pulsing throughout.  Case in point, the very first track, "This Is Gonna Hurt" just burrows its way into your brain with an urgent, almost electronic beat and a painfully memorable chorus that I can't force out of my brain for hours once I have heard it!  There is also a very tasty guitar solos courtesy of Mr. Ashba, who has all sorts of talent on the fretboard that he displays throughout this record.   Lead single, "Lies Of The Beautiful People" is Nikki's anthem of rebellion against People Magazine's 100 Most Beautiful People list, of all things, and there is definitely a seething anger in the lyrics despite the uptempo musical delivery.  On the band's website, Nikki goes so far as to say, "I was just ashamed that there's even such a list out there," when discussing the basis of the song.   "Are You With Me Now" comes across like a mid-tempo Daughtry rocker as far as tempo goes, but takes the listener to "places that scare you" and beckons you to "come back from the dead", although it is not nearly as ghastly as it may seem from those lyrical snapshots.   "Live Forever" is one of the faster songs on this album, and "Deadlihood" is another angry rocker with a big drum sound and chugging rhythm that rails agains the lure of the Hollywood lights that, ironically, also beckoned to him and pals Vince, Tommy, and Mick not all that long ago.  "Goodbye My Friends" teases at ballad material with a 30 second long piano intro, but rips into full-blown rocker territory and then never looks back.

Not all of the songs are full-steam ahead rockers, as "Smile" is an acoustic guitar, piano, and strings ballad that is a real shocker when your ears first stumble across it, but it is a great song of love and redemption.  On a similar note, "Oh My God" is an almost U2-ish sounding track, which works very well here, keeping the record from slipping into some of the extremely black-souled material of the first album, which by its sheer nature was supposed to be almost painful to listen to at times.  And album closer, "Skin" is another piano-based track about being who you are and ignoring what other people say about you or label you as.  Deep and poignant, this song probably connects to the photography of the book (and the samples in the liner notes) as well as any on this album.

There are no interludes here like there are on the first album, which is a definite plus for me.  Also, with the exception of just one song, "Help Is On The Way", there is really nothing here that I would say I could do without, and even this song isn't all that bad...I just HATE the intro to it to the point that my skin crawls with the little "do-do doo de doo" that James intones over the opening notes and then intermittently throughout the track.

Sixx A.M. is for real and I think they are here to stay.  In fact, I think that there is a very real possibility that this band outlasts Motley Crue, who I think may have one more album in them if we are lucky.  If you liked Heroin Diaries, I think you will love this album.  If you had no use for Heroin Diaries and will never give a chance to anything Nikki does outside of the Crue, well, it is your loss, as this is a darkly attractive album of extremely well-crafted songs that showcases a band hitting on all cylinders.

Rating:  Crank this to 8 and ignore your friends who call you a poser for liking it!