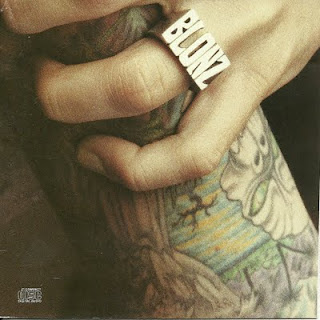 Georgia-based hair metallers Blonz never hit the big time, but they did manage to squeeze out one very solid debut album before going the way of so many one-shot-and-gone bands.  It really is odd how some bands made it and others didn't, especially since it would seem that Blonz had plenty of reason to succed:  major label backing, big name producers (Phil Ehart and Steve Walsh of Kansas fame), a better-than-average collection of songs, above average musicianship, and the typical MTV hair-band look.

Perhaps part of the problem is some fickle listeners didn't even make it past the opening keyboards of "Miracles".  I'll be honest, I almost didn't either!  When I first heard those New Wave sounding keys and ambiant noises, I thought I either had the wrong CD or the wrong band with a similar name, because this certainly didn't sound like the band I was looking for!  However, once I was past that intro, "Miracles" turned into a solid uptempo rocker with the popular gang vocals and a rather catchy chorus.  "Hands Of Love" is another nice little rocker that was on par with just about anything the "big" bands were putting out.

Blonz throw the listener a curve with "It's The Same", a backwater-downhome-countrified rocker complete with a Jew's Harp and some crickets in the background.  The song reminds me of the "Blaze Of Glory" sound that Bon Jovi made popular with his Young Guns soundtrack, and Blonz does it very well.  A very catchy song that is one of my two favorites here.

"Trouble Child" starts off with a full minute-long intro that reminds me a bit of something Tesla might do, but then shifts into full-on rocker mode, while mandatory power ballad, "What's On Your Mind", treads similar waters to Winger on their slower, keyboard-infused moments.

Things crank right back up again with another nice rocker in "One And Only" before heading back into slower acoustic territory with "Rainbow" which again mines that Bon Jovi territory I mentioned previously.  By the time I got to this track, I think I had stumbled upon another potential problem for Blonz and this record:  nearly every song has some sort of intro to get through before getting to the heart and soul of the song.  "Rainbow" has a thunderstorm intro and the long acoustic section before the rest of the band kicks in, and I have mentioned some of the other intros already.  While they might be interesting the first time through, they become tedious and, in some instances, annoying upon multiple listenings.  With so much other similar material from dozens and dozens of bands, I think things like long intros and such actually serve as a hinderance rather than an attraction to the casual listener who can be easily swayed to grab the next "hot new band" that comes along.

"Skintight" is one of the better tracks here and was co-written by Larry Elkins of the equally good and equally forgotten band Fierce Heart.  This is the most rocking tune on the disc and showcases a nice guitar solo in the middle that makes me wonder why the band didn't stay with this style throughout.  "Sexy Ride" is another big rocker with a great guitar lead-in that once again really showcases the strong points of this band.  Album closer "Last Call (For Alcohol)" has, you guessed it, another intro, this time of an engine firing up, before the band kicks in with another really solid rocker that sports a surprsing, and very strong, anti-drinking and driving message.  Honestly, it was refreshing to hear a band not extolling the party-til-you-puke mentality that was, quite honestly, the mantra of 95% of all hairbands of the time.

Diversity is a great thing, and I am not saying that Blonz couldn't have found an outlet for their different styles on a follow-up album or two, but with a debut album such as this, I think they would have been better served to focus on one style and stick with it.  I also think the track arrangement is a bit off, as the strongest songs are actually last on the CD and would have been on the backside at the end of the album or cassette, and some listeners may have already turned the music off by that point, especially if they tired of hearing the intros to each song.  Walsh and Erhart do a nice job of producing the record, which is very clean sounding and not so overly polished that it comes off like a pop record, but a few less keys and a bit more guitar would have served the album well.  A solid listen and an enjoyable disc overall, but make sure you give it a chance to play through before deciding that there just isn't enough rock here for your tastes.

Back To Reviews Index
Posted by arttieTHE1manparty at 3:18 PM