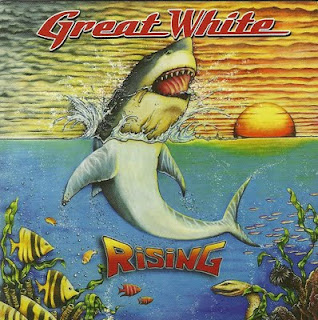 Anyone who knows me is going to say that it is impossible for me to be open-minded in my reviews of anything that Great White puts out, as they have long been my favorite band.  In fact, I probably own more Great White music and memorabilia than most of the band members do!  To say it is a passion would be an understatement to most people; most of my friends call it a sickness.  Still, favorite band or not, I don't rate all of Great White's releases as absolute hits, nor do I even rank them all in my top 40 all-time favorite albums.  In that regard, Rising isn't even close...

Rising is something of a misnomer of a title, in my opinion, as the band seems to be taking a step backward in its material, rather than a step forward.  This album does not rock nearly as hard as the previous two albums following the reunion of Russell, Kendall, Lardie, and Desbrow.  It's not a horrible album at all, but it is just kind of "there" if you know what I mean.  There are no songs that scream hit single, although there are several good, if not great, songs.  "Shine" is probably the hardest rocker on the disc, and album opener, "Situation" is another of the few hard tracks here, as is "Danger Zone" (not the Kenny Loggins song, which might actually rock harder!).  "All Or Nothing" has a bit of a toe-tapping rhythm to it and some nice harmonizing on the backing vocals, but it never breaks out of the mid-tempo rut that so much of this album seems to be tracking in.  Even the bonus cover of the Rolling Stones' "Let's Spend The Night Together" is a laid-back rocker complete with some nice piano work from Lardie but no real punch.

"I Don't Mind" sounds like it could have been included on the Sail Away album, as does "Is It Enough", another mid-tempo track that would be right at home on Sail Away.  In fact, as a way of comparison with the rest of the Great White catalog, Rising almost feels like it falls somewhere between Sail Away and Let It Rock, stylistically, but without the former's laid-back intent or the later's occasional edge.

Of course, for a lot of die-hard fans, Great White is at their peak with Russell's vocals soaring over a ballad, and there are only a couple of tracks that even attempt to fit that bill.  "Only You Can Do" is a bit more upbeat than a lot of Great White's ballad material, but its still a pretty good song.  "My Sanctuary" is more of the bluesy style of ballad that Great White is typically associated with, but even this song doesn't have that "pouring out my broken heart in a smokey barroom" feel that make songs like "Old Rose Motel", "House Of Broken Love", and so many classics so powerful.

Again, I want to state that this is not a terrible record, it just never finds its own way out of the mid-tempo groove it spends much of the album in, never really rocking out and never really hitting that heart-wrenching ballad territory.  The musicianship is top-notch here, and Russell sounds in very good form, and the mix is very solid, also.  The songs just kind of go nowhere fast, making this the kind of album you put on shuffle with a couple of your other all-time favorites just to shake things up.  Here's hoping the next Great White record finds itself back on both extreme ends of the band's spectrum with less time treading water in the middle.

Back To Reviews Index
Posted by arttieTHE1manparty at 11:14 PM