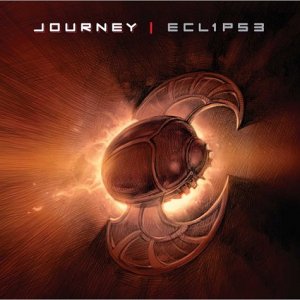 
Not gonna lie...I had totally written Journey off.  Having grown up in the 1970's and 1980's, it was impossible to avoid Journey on the radio, junior high and high school dances, on MTV, and pretty much anywhere that music was played.  While they never ventured into the full-blown hard rock/hair metal sound I always preferred, no one did melodic hard rock, arena rock, AOR, whatever you want to call it, like Journey.  As such, it would be a bold lie to tell you I did not really like, if not love, most of what Journey did.  But when Steve Perry left, I truly feel a large portion of the band's spirit left as well.  I know Perry was never the main songwriter, but it is impossible for a true Journey fan to deny that despite his obvious talents, Steve Augeri never managed to capture the presence that Perry had.  Sure, Arrival and Generations had brief moments of quality creativity, but to me Journey sounded like it was on cruise control.  Then, on the exceptionally boring Revelation, it sounded to me like the band had not only taken off the cruise control, they had slipped the Journey machine into neutral and were just trying to get to the finish line with new singer Arnel Pineda.  (And don't even get me started on the abysmal Pineda-fronted re-recordings of Journey classics that was included as a "bonus" disc in the Revelation set! You call that crap a bonus?!)

Forget everything post-Trial By Fire, folks, because the real Journey has been resurrected, at least musically, because Eclipse (or ECL1P53 if you want to use the cool text version of the album's name...) is easily the best post-Perry album and, in my opinion, the best album this band has released since 1983's Frontiers!  This is a MONSTER of an album that finds Neal Schon suddenly remembering what it means to play huge riffs, memorable solos, and insanely catchy hooks!

From the very first note of "City Of Hope", Journey fans will have to be smiling, because this is what everyone hoped the band could someday pull off again.  Neal Schon sounds like a man on a mission out to disprove all those who criticized him and wrote off his once dominant guitar playing as dead.  The solo in this song alone should put all doubters on notice that this is not the Schon that came across as bored and unchallenged on the last handful of records, as he definitely plays like a man possessed here.  In fact, all twelve of these tracks are vehicles designed to show that Schon, and to a lesser degree Cain and Valory, are still at the top of their game and ready to once again dominate a music scene that, quite frankly, could use some of what Journey has always offered.

Powerful words?  You bet, but this album simply refuses to let the listener down, even if that listener is as jaded with Journey as I had found myself to be.  Castronova practically crushes his kit on songs like "Edge Of The Moment", and combines with Valory to provide the structure that is required for the layers and layers of guitars that Schon attacks each track with.  Cain proves himself equally adept on keys, but they are not as out front or overpowering as they have been on the last couple of snoozers that Journey has released, giving this disc far more of an urgent, driven feel.  However, when Cain is allowed to shine, and not simply provide layering support to Schon, such as on the intro to "Chain Of Love" or on the piano-based ballad "Tantra", it is evident that he is a very talented player in his own right.

And what about Pineda?  Well, to say he is not a Perry-clone would be a denial of fact.  It is very obvious that, first with Augeri and now with Pineda, Schon and Company have sought out a singer who can pull off the classics and also keep the band moving forward with material that would flow seamlessly into a live set.  Pineda has a very powerful tenor, full of emotion and energy; that much cannot be denied.  He does not have quite the range that Perry displayed, but that's okay...this is Arnel Pineda, not Steve Perry v. 2.0.  To me, that was the crime of that very poorly conceived re-recording effort in the Revelation release; Pineda was totally set up to fail by being truly presented as a Perry replacement.  If I can be brutally honest, I would have been downright furious with the band for hanging me out there like that had I been Pineda.  Fortunately, Pineda survived the multitude of arrows, rocks, garbage, and anything else thrown at him after that nightmarish experiment, because his voice is a vital part of what makes Eclipse so great.  He is comfortable, confident, and exudes an energy that has been missing since the best parts of Trial By Fire, which was, of course, Perry's last album.

Despite all the glowing things I can write about Cain and Valory and Pineda and Castronova, this album is all about the resurrection of Neal Schon and the re-elevation of him to at least guitar demi-god status.  There are moments where Schon absolutely shreds, such as at the end of "Anything Is Possible", that make the listener seriously wonder where this band has been for the past 15 years.  The passionate feel for the song is on display in the mid-tempo rocker "Resonate", and after laying low for the first five minutes of "She's A Mystery", Schon explodes with 90 seconds of gritty riffage and piercing solos, completely taking over what had been a fairly airy, almost etheral feeling song.  Even on the closing instrumental track, "Venus", Schon steals the show with a blistering shredfest that borders on the experimental style of a Satriani.  Incidentally, Castronova sounds like he has a personal issue with his drum kit on this track, as he abuses his instrument in an aggressive fashion that I am not sure has ever been displayed on a Journey song before!

Is it mere coincidence that as soon as the band jumps to the Frontiers Records label they release their best album since the classic Frontiers record?  I don't know, and frankly, I don't care.  If this is where Journey plans to spend the twilight of their career, I am all for it, because this is a band that has fully resurrected themselves to the sound of their glory days and they have released one of the best albums of 2011 with Eclipse!  This is an absolute must-have for hard rock/melodic rock/AOR fans.

UPDATE (2/3/12):  After having several months with this album, I have to state that my initial feelings about the musical quality of this album still stand.  I don't believe Schon has ever sounded stronger, at least not since Frontiers, and that the band is tighter and more cohesive than they have been since Perry left the final time.  That being said, I find myself struggling to remember the hooks of most of these songs.  Where are the memorable choruses that ring through your head for days on end once you hear them?  There are no "Don't Stop Believin'", "Separate Ways (Worlds Apart)", or "Wheel In The Sky" to be found here, no "Stone In Love", "I'll Be Alright Without You", or "Message Of Love".  I still think this is a great, GREAT album musically, but just not as catchy as classic Journey.  As such, I have slightly downgraded my original rating from a 9 to a 7.5.  Still a definite must-have disc from 2011 and one that I do still listen to frequently.  Perhaps more time will increase the memorable-factor for some of these beautiful pieces of music.


Rating:  A nearly flawless musical gem, but an album that lacks the memorable songs of classic Journey.  Crank it to 7.5!

Back To Reviews Index
Posted by arttieTHE1manparty at 1:04 PM