BANGALORE CHOIR "All Or Nothing (Live At Firefest)" 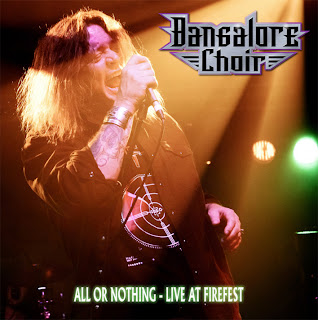 Now that 3/5 of the original line-up is back together following last year's Cadence record, it only makes sense that Bangalore Choir would hit the festival circuit.  This live album, All Or Nothing, was recorded at Firefest and is limited to just 1000 copies.  (There are several Firefest releases, but this is the only one I ordered...).  My interest here was to compare the classic tracks from the debut to the more modern hard rock sounds of the Cadence songs in a live setting.  Much to my pleasure, despite the fact that they were written 15-20 years apart, the two studio albums' songs sound excellent side by side and this is a high quality recording that showcases the band in top notch form.

Reece's vocals are, of course, the focal point of this group and he does not disappoint live.  Having been the vocalist for Accept, Sircle of Silence, and multiple other projects, Reece knows how to deliver a song in the studio and that carries over well to the live performance here as well.  It is impossible not to notice how similar he sounds to David Coverdale at times, due mostly to the lower register and bluesy approach he takes to his vocals, but that is not a bad thing at all.  The rest of the band steps up and delivers quality performances as well, with Mitchell and Susemihl sounding particularly strong on the guitars.  The bass and drums are solid also, but not overpowering to the overall sound, which is sometimes not the case in a live setting, particularly if the mix is not done well.  That is not an issue here, as the production and mix are of very good quality.

The song selection here is very good, but I would have liked to hear a couple more of the new tracks, like "High On The Clouds" or "Heart Attack and Vine", for example.  The choices from the debut are exactly what I would have expected and wanted, with "Angel In Black" always being one of my favorite songs of the era.  "Loaded Gun" and "Doin' The Dance" are both performed very well, also, and don't disrupt the flow of the newer material.  The same can be said of "If The Good Die Young", which is really the only ballad in this live set.

I wish this album was more readily available, but I can understand the need to limit the pressing, both for economic and collectibility reasons.  I would encourage fans of the band, or of Reece in general, to hurry and try to order this, as once they are gone there are to be no more pressings (at least according to the press release).  I am not sure how many remain, but check Destiny Records homepage for information about this or the other Firefest releases.

Rating:  Rock this to 6.5, which is a pretty high number for me when rating a live album... 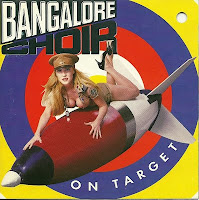 Posted by arttieTHE1manparty at 2:48 PM