CHRISSY STEELE "Love You 'Til It Hurts" 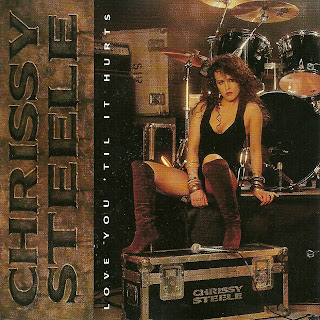 (c) 1991 Chrysalis Records
Chrissy Steele--Vocals
Brian "Too Loud" MacLeod--Guitar, Programming, Vocals
Pat Stewart--Drums
This little EP/maxi-single was actually a promo release designed to gain some airplay in advace of Chrissy's full-length debut album, Magnet To Steele.  Attempting to cash in on the mini-wave of female hair metal acts that were hitting the airwaves at the time, this promo (and the album itself) are actually the brainchild or Brian MacLeod who is possibly better known for his work with the Canadian act Darby Mills and the Headpins.  I say possibly because I am guessing you have never heard of this act, either.  I have read in a couple of places that this was actually going to be a Headpins release but the band broke up, and then MacLeod got sick and was unable to tour, so he took Steele, who had fronted a couple of Headpins tours, and put her vocals to his music, packaged it as a Steele solo effort and voila, here you go!
I traded off the full-length album a few years ago and kept this EP/maxi-single for a couple of reasons.  One, these promos are much harder to find and are generally more collectible and worth more money should I ever decide to part with it.  Two...well, to be honest, all but two of the good songs from that album are on this EP anyway including both songs that were released as singles.
Chrissy Steele is not shockingly different from most of the women trying to make it in metal in the late 80's and early 90's.  I have heard her compared to Lita Ford, which is a bit of a stretch, but I guess I can see where people are aiming.  Lee Aaron is another comparison I have heard/read, and again, it's a stretch but one I can understand.  Steele never rocks as hard as Aaron does, and she is actually a better singer than Ford ever was, so I am not overly sure how to classify her sound.  If you are familiar with Femme Fatale, I would say Chrissy's sound is more akin to their front lady, Lorraine Lewis.
"Love You 'Til It Hurts" was the lead single from the album and featured Mark Slaughter on backing vocals.  This uptempo rocker has a catchy hook and showcases some pretty smooth guitar work from MacLeod. "Try Me" is more mid-tempo but has a pretty heavy bottom end and showcases Steele getting a bit more gritty with her vocals.  "Armed And Dangerous" is another mid-tempo rocker that is probably the best song on the EP or the album and was co-written by Jeff Paris.  EP closer, "Love Don't Last Forever" was also released as a video and single and was a very good ballad and a perfect representation of the chick-fronted sound that a lot of labels were looking for when looking for another Vixen.  A bit too sugary for my taste, this is still a solid song that reminds me a lot of the stuff Heart was putting out around this time, such as "What About Love", and showcases the high end of Steele's vocal range very nicely.  I am somewhat surprised this song didn't do better than it did, but of course hair metal was starting to die off by the time this song was released in 1992.
Overall, I think Steele was yet another victim of radio's upcoming love affair with Nirvana and Company and she really stood little chance of breaking through on her own.  This is a solid-but not outstanding-effort that I think a lot of Heart and Vixen fans would enjoy.  I believe this is the only album Steele ever released, which makes this promo all the more rare.  Snag it if you find it...you will probably like what you hear and may even have a nice trade piece on your hands.
Rating:  Rock this EP at a 6.5; the whole album would rate a 5.5 for me.

Back To Reviews Index
Posted by arttieTHE1manparty at 6:47 PM