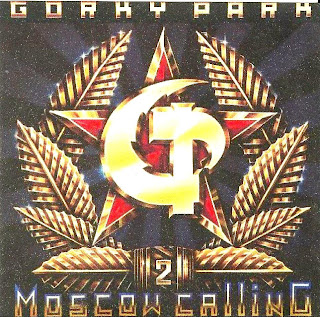 In 1989, MTV aired a video called "Bang" by the first Russian band to gain airplay on the video network.  That band was Gorky Park.  "Discovered" by Frank Zappa and assisted in coming to America by Jon Bon Jovi and Richie Sambora, Gorky Park used their novelty status to gain Top 100 status for their debut album (it peaked at #80 according to Billboard) and a position on the Moscow Peace Festival bill alongside State-side hair metal heroes Bon Jovi, Cinderella, Skid Row, and  Motley Crue, to name a few.  Gorky Park appeared positioned to make a relatively big splash in the United States music scene...and then grunge happened.  Of course, we all know what happened to nearly every hair, glam, and sleaze act of that era, and Gorky Park was swept under just like all the rest.

Unlike many of their contemporaries, however, Gorky Park didn't fold.  Instead, the band went home, changed lead singers (bass player Minkov took over for original singer Nikolai Noskov), and continued on doing what they did best...making catchy, poppy, hook-laden hair metal.  Perhaps a bit oddly, the band never reverted to recording in Russian, sticking instead to the English vocals and lyrics that had garnered them fame and fortune in the North American and European markets.

In 1993, the revamped line-up released this album, 2: Moscow Calling, often simply referred to as Moscow Calling.  Right from the get-go, it is apparent this is a more aggressive, although still radio-friendly, Gorky Park.  Album opener and lead single, "Moscow Calling", starts off with a computerized telephone busy signal and some digitized "I'm sorry, but the number you are calling..." vocals, but then the gang-shouted "Moscow calling!" kicks in and the band launches into a very catchy track that shows off the band's new musical approach.  Rather than the Bon Jovi-styled sound they had on the first album, Gorky Park has adopted a more Def Leppard sounding approach, owing largely to Minkov's vocal similarities to Joe Elliott, and the band's somewhat heavier sound, although keyboards remain a large part of the band's sound on this second album.

"All Roads" is more of a middle-of-the-road rock number, showcasing the band's more bottom-heavy sound, and "Politics of Love" would be a dead-ringer for a Def Leppard track from the Hysteria album if the keyboards weren't quite so out front.

"Tomorrow" slows things down a bit with an almost electronica sound, but it isn't until "Stranger" that we get into what would likely be considered power ballad territory that again has Minkov using a very Elliott-inspired delivery over a distinctly Leppard-ish track.  I'm somewhat surprised the band didn't try to release this as a single, but perhaps momentum had died off after the initial single failed to garner any major airplay in the grunge-heavy radio environment.

The instrumental track, "Volga Boatman" is very good and shows the band in a more metal-styled setting that leads directly into yet another Def Leppard inspired song, "Strike", complete with the layered vocals that Elliott and Company used so frequently on Hysteria.  Again, this song retains a bit of an electronica/synth-pop sound to it.  The rest of the album is similarly veined stuff, with "Don't Pull The Trigger" being a power ballad that likely would have been a big hit about five years earlier, and album closer "Tell Me Why" being an acoustic based number not wholly unlike what Extreme did with "Hole Hearted".

While not as commercially successful as their debut, this album did manage to go gold, selling more than 500,000 copies, and I think it is a far superior effort to the debut, which while decent with a few catchy songs was far too slickly produced.  This album is very difficult to come by, at least without picking up a bootleg (which I accidentally did) or the 2000 reissue.  I have seen the original 1993 version sell for nearly $250 on eBay, and Amazon had used copies selling for more than $50 when I last looked, so be prepared to shell out some money if you want the real deal here.  While I would NEVER tell you it is worth that kind of money, I would have no problems shelling out $20 or $25 for this disc due to both its improved quality and its collectibility.

Return To Reviews Index
Posted by arttieTHE1manparty at 11:10 AM