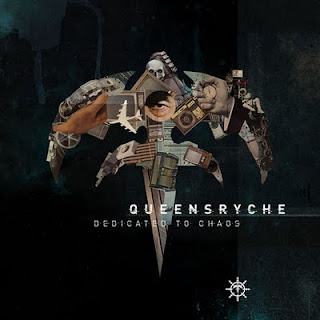 (c) 2011 Roadrunner Records
Geoff Tate--Vocals, Keyboards
Michael Wilton--Guitars
Eddie Jackson--Bass, Fretless Bass, Backing Vocals
Scott Rockenfeld--Drums, Programming, Backing Vocals
Parker Lundgren--Guitars
It has to be hard to be Queensryche.  No matter what you do as a band, you are not going to win with the majority of your fanbase.  Fans who loved the sound but not the concept album style of Operation: Mindcrime tended to decry Empire as too radio-friendly.  People who claimed to be tired of the commercial sound of Empire hated the more progressive feel of Promised Land.  People who wanted the band to be more experimental completey ran down Hear In The Now Frontier.  Folks who thought the line-up had grown stale bemoaned the loss of Chris DeGarmo on Q2K.  When DeGarmo came back for Tribe, fans hated that as well.   Everyone who screamed for Operation: Mindcrime II...well, pretty much bagged on it (even with Ronnie James Dio making an appearance!).  Heck, in November of 2010, when they played music from their American Soldier album for the troops in Iraq, they were bombed (I really hope it didn't have anything to do with the music!).  How can this band ever win unless they remake the first EP and their first two full-length albums?  (Heck, I'm guessing people would bag on them for being unoriginal then....)
I honestly hesitated reviewing this album simply because no matter what I think of it, I am sure most people will hate it without even giving it a fair chance, and that is sad.  To me, this is the best Queensryche has sounded since Promised Land, which is my favorite album by the band.  However, you can hear elements of Mindcrime, Rage For Order, Empire and Now Frontier-era sounds in Dedicated To Chaos.  In fact, Geoff Tate has stated that he thinks the musical direction of this album is "the Empire record set 25 years in the future", and I think that is an accurate description, as it finds the band taking the best of all those records and putting them into the perverbial musical blender and pouring out a very solid, enjoyable album.
"Retail Therapy", with Jackson's bass lines rumbling across the bottom end of the track and the twin guitars of Wilton and newcomer Ludgren feeding that same hard-rock vibe that made so many cuts from Empire turn into rock radio staples.  "The Lie" has Operation: Mindcrime written all over the hook, but the vocal styling lends itself more to Empire.  "Hard Times" and "I Take You" could have come from that album as well, and "At The Edge" blends perfectly the Empire and Promised Land sounds.  Speaking of Promised Land, the experimental, proggy, even jazzy elements of that great album are present in songs like "Higher", which even incorporates saxaphone like the song "Promised Land" did.  "LuvnU" is pure Hear In The Now Frontier as far as the heavy-as-stink sound it delivers with its big drums and stripped down guitar tones combined with modern elements.
Am I trying to make you believe this is the perfect album?  No, not at all.  "Hot Spot Junkie" isn't terrible, but it sounds like it was a bit rushed in its writing.  I could do without "I Believe", which is almost too trippy to really fit here, and sounds more like something from Tate's less-than-good solo album. "Big Noize" which closes the album, is a bit too Pink Floyd for my tastes, but it isn't a horrible song by any stretch.  "Got It Bad" sounds like the band tried to mix dance beats into a Queensryche song.  If you think I'm kidding, Scott Rockenfeld said about parts of the album, "It's huge rock but with a great dance vibe to it, real modern dance. It's kind of like Rage For Order through a time tunnel, bringing it into the now mixed with Empire."
Look, I don't get that whole "real modern dance" part of the quote, but even Rockenfeld agrees with me that this record is a mix of pretty much all the best parts of the Queensryche sound.  Again, I am not going to tell you that this album is perfect or that it will please all fans, especially if all you want to hear is "Queen of the Ryche" or "Lady Wore Black" sounding songs.  Folks, that Queensryche isn't coming back and, honestly, it hasn't been around since those songs were released.  This band has progressed and morphed and changed pretty much with every release from Mindcrime on, and this album is no different.  However, I think this is the strongest that Tate's voice has sounded in a long time (although I thought he sounded pretty good on American Soldier, also...), and Parker Lundgren teams up perfectly with Michael Wilton for an excellent double-barrelled guitar sound.  And, as always, the true heartbeat of this band has always been the duo of Jackson and Rockenfeld who continue to hammer away at the bottom ends of these songs, giving them life and strength, even on the most laid-back of tracks.
If you are willing to open your musical mind a bit and accept Queensryche for what they are (and have been for the past 15 years) odds are there is going to be something you will really love about this album, especially if you were a fan of Empire or Promised Land.  But, if you want to pigeon-hole them and try to reconcile this album with one that is almost 25 or 30 years old, you will be sorely disappointed.
Rating:  Crank this to a 7.5...although I'm sure that rating will be as polarizing as the band is!
Back To Reviews Index
Posted by arttieTHE1manparty at 12:16 PM