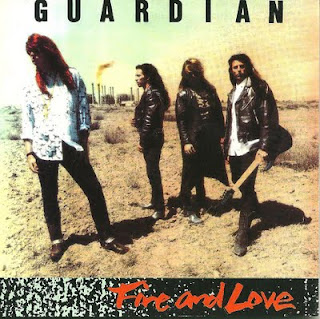 (c) 1990 Pakaderm Records, Word/Epic
Jamie Rowe--Lead Vocals
Tony Palacios--Lead Guitar, background vocals
David Bach--Bass, background vocals
Karl Ney--Drums, background vocals
While I realize that no band will ever top Stryper in the minds of fans as far as who the biggest of the Christian hair metal acts was.  But if Stryper is number one, it would be hard to put anyone above Guardian for the number two slot.  It would be even harder to find another Christian band from that era that had more potential for radio crossover than Guardian...or an album more equal to that task than Fire And Love.  Yet, as with so many great bands and great albums from that era, things just didn't work out like they should have.
Guardian had already been around for a few years prior to this record.  However, following a change in lead vocalists which saw Rowe leave his previous band, Tempest, Guardian exploded with what I consider to be one of the top Christian hair metal albums of all time, if not the best.  From the very first note it is obvious this is a different, more powerful band with far more mainstream appeal in sound than the band had been with Paul Cawley behind the microphone.  Add in the slick, stylistic production skills of John and Dino Elefante, and this album just pulses with energy and charisma that is not found on other Christian releases of the time.
Do not mistake the crossover potential of this album for a lack of faith-based lyrics or generic, watered-down messages.  That is not the case.  Guardian were never "Bible-thumpers" in their music, but they also do not shy away from mentions of God, Christ, Heaven, or other Biblical themes; they merely incorporate those themes into lyrics that do not intimidate the listener or give them a feeling of "turn or burn", much the same as Stryper manages to do on their albums.
Standout tracks from this excellent release include the title cut, which includes a rocking chorus complete with a layered, almost church-choir background vocal sound, albeit done in a very rocking fashion, the rocking "Time And Time Again", and big-time ballads "Time Stands Still" and "Never Say Goodbye", either of which could have found their way onto MTV or rock radio at the time.
Lead guitar player Palacios is incredibly gifted and as equally underrated as far as his skills go, probably because the talent of so many non-Stryper Christian bands went largely unnoticed at this time.  Rowe reportedly auditioned for/was offered the lead vocalist slot in Ratt once Stephen Pearcey left the band, but I am not 100% sure how that story shakes out, although I think he would have done a solid, if not clone-like job fronting that legendary band.  Jamie's raspy, bluesy delivery style is one of the high points of the Guardian sound for me, and even on later, less melodic/hair metal releases, it is still the one thing that pulls me back to what I consider sub-par material.  The rhythm section of Ney and Bach is every bit up to the task on these tracks, providing a solid backbone for the rest of the Fire And Love beast to be built upon.
This is just an excellent, well-executed, well-written album full of huge guitar hooks, bluesy-yet-pop metal riffs, and powerful vocals.  There is very little, if anything, to dislike about this album, and it is one that I always recommend to my friends or to people who contact me looking for "some great hair metal I haven't already heard".  That statement alone is a sad one, as there is no reason that people have not already heard Guardian and especially this album and the one that would follow, Miracle Mile.
Rating:  Crank this to 9!

Back To Reviews Index
Posted by arttieTHE1manparty at 8:24 AM