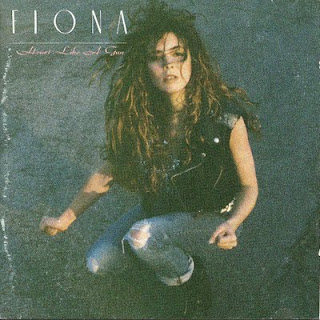 (c) 1989 Atlantic Records
Fiona (Flanagan)--Vocals
Brad Gillis--Guitar
Rod Morgenstein--Drums
Kip Winger--Bass
Additional Musicians (partial listing)
David-Glen Eisely
Nate Winger
Dweezil Zappa
Beau Hill
While this album contains her biggest hit and was easily the best-selling release of her career, a lot of people do not realize that this is actually Fiona's third studio disc and fourth disc overall.  Even more people probably do not realize that Fiona had already starred in a movie (Bob Dylan's awful Hearts Of Fire) by the time this album came out.  And still fewer likely realize that her "band" for the album included Brad Gillis of Night Ranger, Kip Winger and Rod Morgenstein of Winger, Kip's brother, Nate, and plenty of other big names such as Dweezil Zappa and David-Glen Eisley.  How did a relative unknown manage to pull this off?  Simple...you marry one of the most powerful producers in the business...in this case, Beau Hill.  (Interestingly, she would later be in a relationship with a guitar player Reb Beach, also of Winger....).
On Heart Like A Gun, Fiona stepped up her sound a little, moving slightly past the more Benatar-ish sound she had on her first two albums, and giving at least a half-hearted shot at the hair metal sound that was burning up the charts in 1989.   There is still nothing even remotely "heavy" on this album, and even when she is attempting to rock she can't seem to pass up the opportunity to slip in some bubbleum pop, a la Debbie Gibson or Tiffany, into the guitar-driven pop-rock she and her band have crafted here.  For example, "Little Jeannie (Got The Look Of Love)" and "Where The Cowboys Go" both have potential to be nice rockers but for some reason Fiona or Beau or someone thought, "hey, you know that "I Think We're Alone Now" song...let's do that!" and they put in a sickeningly saccharine dance beat that should have Gillis, Winger, and Morgenstein ashamed to even have their names listed in the credits!  Her voice wants to rock, it sounds like, but it just never happens.  I have no clue how Headbanger's Ball aired "Everything You Do (You're Sexing Me)", her duet with Kip Winger, because there ain't NOTHIN' head-banging about it!  It's catchy, sure, and she has pin-up good looks, but so did Samantha Fox and she rocked FAR HARDER than this song does.
I don't like doing reviews that are pretty much all negative, but I truly have a hard time finding much good to say about this record.  I think Fiona had a considerable amount of vocal talent, and the musicians assembled here should have been able to crank out one heck of a hard rock record.  Methinks it was likely her husband (at least I think they were married at the time...) that decided to try to kill to musical birds with one stone, mixing hard-rock and mall-pop, but it just doesn't work, at least for me.  This album has been reissued at least one time, with Wounded Bird Records putting it out a couple of years ago but there is no new material on it that I am aware of.
Speaking of new material, Fiona announced on her official website, FionaRock.com that she will have new music out in 2011...if you actually want to hear it.  I would say I am hopeful because James Christian of House Of Lords is producing it...but I was hopeful when I bought the Heart Like A Gun record, also.
Rating:  Turn this one down to 4...and make sure your house is sound-proofed so no one knows you secretly still like "Everything You Do (You're Sexing Me)"!
Back To Reviews Index
Posted by arttieTHE1manparty at 8:54 PM