GINGER ROXX "Caught In The Act" 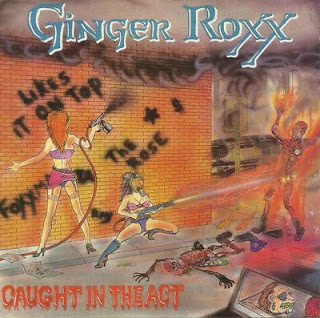 (c) 2008 Retrospect Records
Ray Rikkter--Voices
Richie Rich--Lead Guitar, Vocals
Tony "TA" Romano--Guitar, Vocals
T.K. Foxx--Cannons (drums), Vocals
Matija T. Rose--Vass, Vocals
Some things get better with age, some don't.  Ginger Roxx didn't...not at all.  Originally released in 1989, this album should have stayed there, because it is not good.   There is very little redeeming about this release except it A) preserves a piece of musical history that would have been forgotten otherwise and B) shows that not every band that had the "look" of the LA Strip had the talent to take it to the next level.
The songs here are very bland with no real hooks or catchy choruses.  The vocals vary from boring to off-key at times, and other than the decent leads and a few catchy rhythms, there is nothing memorable about this album.  The mix is very bad with the guitars buried behind the the overworked bass and the SOME of the drums (you can barely hear the cymbals on some songs...).  If I had to pick a stand-out song or two, I guess the ballad "Rescue Me" isn't TERRIBLE, and "On The Loose" is an uptempo rocker that had potential if the band had a different vocalist and the production wasn't so terrible.  Even on these songs, however, the lyrical cliches are ridiculous and show no depth or originality at all.  It is almost as if the band was simply looking for rhyming words to put together just to complete a song around whatever they thought a clever title would be for a song.
One of the most surprising things about this release, for me, is the fact that Retrospect put virtually no effort into it.  The insert is a single sheet with no extras at all.  There is no history of the band, no new photos, no shots of flyers or gigs or anything.  There aren't even any lyrics, live tracks, or bonus songs on this CD.  To top it all off, this CD sounds like it was burned straight from a cassette that the band likely recorded on about a $1000 budget, as the sound is very muffled, very basement quality, and doesn't sound like it was properly mixed originally, and was certainly not remixed or remastered for this release.  This is a VERY disappointing release that, had it been the very first Retrospect release I had bought, would have definitely had me questioning whether to buy one of their other reissues.  Luckily this is definitely the exception and not the rule, as Retrospective releases tend to be some of the best reissues available and of generally high quality.
Rating:  Turn this off!  3 is the best I can do for this, and that may be generous...