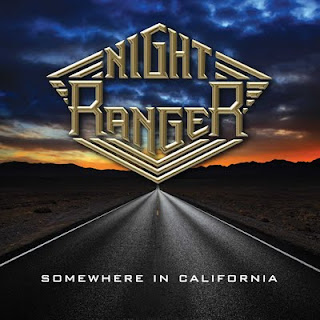 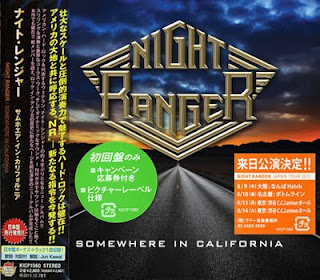 
Now, THIS is Night Ranger!  Forget those last couple of releases that found the band wandering around musical styles, sounding lost both musically and lyrically most of the time.  Heck, I was even starting to question whether Blades had lost some of his vocal skill as he just didn't sound right most of the the time on Neverland, Hole In The Sun or Seven.  Their live album, Rockin' In Shiyuba gave me hope, however, as the band sounded like they were having fun and were completely at home with their past hits, which, let's be honest, were all about fun lyrics, catchy hooks, Gillis' under-appreciated guitar prowess, and Blades and Keagy trading off on lead vocals.  1980's and early 1990's Night Ranger was FUN...late 90's and 2000's Night Ranger was BORING, tedious, and, well, not Night Ranger any longer.
Somewhere In California is FUN Night Ranger again!  This is the album that should have followed 1988's Man In Motion album or even 1987's The Big Life.  Opening track, "Growin' Up In California" is a catchy song to get things rolling, but it is nowhere near the best this album has to offer.  "Lay It On Me" finds Night Ranger, and especially Gillis, ripping through an uptempo rocker like they haven't done in years!  This is full-speed ahead hard rock with a scorching solo in the middle that brings to mind Blades "other band" Damn Yankees with its power and crunch.  The same can be said for "Follow Your Heart" which again has a Damn Yankees feel to it and showcases the best Gillis guitar antics since Dawn Patrol, in my opinion.  In fact, the last 1:30 of this song is practically nothing but a massive Gillis solo and it is fantastic to hear!
Of course, no Night Ranger album would be complete without a couple of big time ballads, and the band does not disappoint in this area, either.  While there is only one true ballad here, it is a big time effort.  "Time Of Our Lives" starts off as a piano-based ballad before the big, layered power chorus kicks in and the rest of the band crashes in on what would have been a major power ballad on rock radio in 1989.  This is a killer ballad and may be the follow-up to "Sister Christian" that I think the band was always looking for.
From here through the rest of the album, it is nothing but adrenaline-charged rock that finds Night Ranger catching a full second-wind on their sound, as this is pure 1980's hard rock with some modern production to really bring out the sound.  "No Time To Lose You" sounds like it was ripped straight off an MTV playlist from about 1987, and "Live For Today", while a bit more mid-tempo, is a nicely polished track that really showcases Blades' vocals.  "Rock N Roll Tonite" has a similar feel to many of the band's biggest hits, particularly in the not-quite-sung-but-not-really-spoken vocal delivery.  You will know what I mean instantly upon hearing this song.  Keagy takes vocal duties over on "End Of The Day" which is a melodic rock track again worthy of anything the band has done in their storied past.   If you snag the Japanese import or find the bonus song for download somewhere, it is an all acoustic number that is just Gillis and his guitar and shows the exceptional talent that the former Ozzy guitarist possesses.
So far, this is a summer of incredible comebacks, especially where Frontiers Records is concerned.  For me, it is very difficult to rank Night Ranger with anything other than a 10, as I feel this disc is every bit as good, if not slightly better, than Journey's comeback.  This is simply a must have for not only Night Ranger fans, but for fans of the 1980's hard rock scene.  An incredible return that I do not forsee worming its way out of rotation anytime soon for me!
UPDATED 7/11/2011:

As if the Japanese bonus track was not enough, Night Ranger, in a slick marketing move, has made two more bonus tracks available via download only.  If you go to iTunes, you can download the band's cover of AC/DC's "Dirty Deeds (Done Dirt Cheap)", while Amazon has a new version of Damn Yankees' "Coming Of Age" featuring none other than Uncle Ted Nugent!

The AC/DC cover is solid, if not overwhelming, as it stays pretty true to the original version.  It is interesting to hear Night Ranger use vocals that are as gritty as these, however, and it is performed very well musically.  Worth paying for the download?  As a Night Ranger completist, I say yes.  I think AC/DC fans might also agree.  For those simply wanting the basic album, however, I don't think it's worth buying independently, as it is a song that we have heard many other bands attempt.

The new version of "Coming Of Age" is smoking, extended (nearly 8 minutes long), and particularly interesting for a couple of reasons.  First, the solo in the middle has been COMPLETELY reworked and is now something akin to the stuff he did in his "Stranglehold" style, and it makes for a very interesting update.  The second reason for the interest here is, obviously, one has to wonder if a new Damn Yankees record could be being hinted at here.  If you can only afford one additional download, or if you only want the best one, this is definitely the one to get!  Absolutely fantastic to hear this dusted off and reworked.

Back To Reviews Index
Posted by arttieTHE1manparty at 11:14 AM