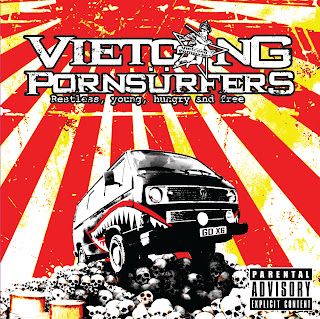 Yet another entry in the Swedish glam/sleaze scene, this punk-sleaze outfit has made the rounds in Europe, touring with the Babylon Bombs, Vains of Jenna, and Sister Sin, and, according to their press release, were "threatened with death if they didn't play more encores" on at least one occasion.  I don't know about that but I could see where these guys could easily end up in a location that might threaten them with death, as these guys play some absolutely fast and furious punked-up-sleaze that is not likely to attract the nicest, cleanest-cut audience in the world.

VCPS, as they are often referred to, start off their debut release at full speed with "The Flag Is On Fire" and they never, ever let up off the accelerator!  There are no ballads...heck, no mid-tempo numbers, either...just pure, raw, balls-to-the-wall adrenaline blasting out of the speakers.  Lead vocalist Tom sounds like a combination of Motorhead's Lemmy and Zodiac Mindwarp as far as his delivery and sound are concerned, and for much of the album the band plays a style that is not all that far removed from the fastest stuff Motorhead has put forth, but with a much sleazier approach to the guitars and production.  Favorite tracks "Getaway Boy" and "Don't Need Your Lies" both feature some furious rhythms and ripping, if short solos, that will leave the listener's ears bleeding if cranked to a substantial level.  "A Song For Jonas" takes a bit of a more radio-friendly approach, and while still an uptempo rocker, it is a bit less abrasive than the rest of the ablum and features some nice fretwork from Teddy and Tom.  Wanting to make sure the listner doesn't think they have gone soft, however, VCPS crank things right back up again on the last album track, as "Let Me In" revs the speed back up and the shouted chorus grinds its way into your head.

Two demo tracks are included on this release, which gives the listener ten full songs for the price of admission.  That being said, "Cun*s Don't Play Guitar" definitely has a more raw, less refined sound to it and I am pretty sure the band is attempting to see how many swear words and filthy terms they can slip into one three-and-a-half minute punk song!  This is definitely more punk than sleaze and is easily the weakest track on the disc, at least for me, although it gives the listener an idea of where the band came from and what they are likely to hear in a live setting.  Likewise, "Spanish Rose" really doesn't fit the feel of the rest of the album as the production quality is significantly different and the sound doesn't have that gritty, sleazy feel the rest of the disc does.  Once again we have a quirky punk song, this time featuring an almost distrubingly-clean guitar tone on the lead parts (think Sublime-quality tuning....very weird).

The Vietcong Pornsurfers are NOT for the faint of heart, as they are unabashed punk oozing out of your speakers on a thick layer of sewer slime, putting out one of the truly sleaziest albums of 2011...so far!  If break-neck speed, shouted choruses, filthy language, scorching lead guitars, pulsating bass, and beat-to-death drums are not your thing, VCPS is not for you.  However, if you have the courage to give Restless, Young, Hungry and Free a listen, the gutterpunk in you is likely to sneer a bit, give the stereo the finger, and then crank the music even louder!

Rating:  Crank this one to a downright filthy 8.5!

Back To Reviews Index
Posted by arttieTHE1manparty at 2:12 PM