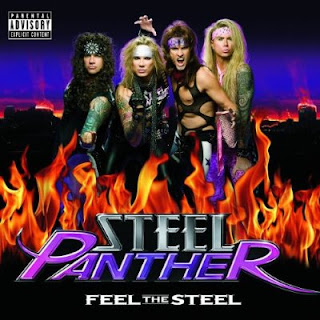 First things first...Steel Panther can flat out rock with the best of them.  No question.  In fact, it might be hard to find a band that can do what Steel Panther does...cover other band's material AND put out their own original material...any better.  Starr/Saenz, who possesses a Ph.D. in English literature, is a more than competent lead vocalist who has made a good living for himself not only in Steel Panther and its various incarnations, but also as the leader of the Van Halen tribute band, The Atomic Punks, not to mention a stint with the legit band LA Guns.  Satchel/Parrish is an excellent guitar player, and Foxx/Haley and Zadinia/Leader form a solid rhythm section, with all contributing vocals.  Anyone who gets the chance to see the band perform should do so, as they are guaranteed to enjoy a killer performance that more than likely will also feature one or more stars of rock or metal joining them on the stage at any given show.

A lot of people comsider Steel Panther, formerly known as Danger Kitty, Metal Shop and Metal Skool, to be the Weird Al Yankovic of the metal world, as so many of their songs are parodies.   However, on this album, the band turns in twelve original songs, although several still pull pieces of other well-known songs into the Steel Panther contributions (you can hear Bon Jovi ALL OVER "Party All Night", for example).  As stated, the musicianship is unquestionable, as these songs are incredibly well put together, catchy as all heck, and filled with hooks, solos, wah-wah's, whammies, and all the bells, whistles, and tricks that made hair metal so popular in the 1980's.  But in spite of all the great musical moments, it is the lyrics that make...or break...Steel Panther.

There is no getting around it; Steel Panther is vulgar.  In fact, I am not sure vulgar is a strong enough word.  To claim that the humor displayed in the lyrics is "toilet humor" might be an insult the the plumbing profession, because there may be some sort of sexual reference record set with this album.  While it is humorous for a song or two, the chuckles turn to embarrassed grins...and those soon fade to painful winces.  "Death To All But Metal" is riddled with homosexual references made about rappers,  "Turn Out The Lights" gives multiple reasons why the singer wants to be alone in the dark with the lady of his choice at the time, and "Stripper Girl"...well, do you really need to dig too far into the gutter of your imagination to guess where this otherwise smoking power ballad is headed?  Is this honestly the best that a doctor of English lit can come up with?!  The closest thing to a non-vulgar song is "Hell's On Fire", which, at best, is just plain stupid...but in a funny way.  If the entire album was made up of songs with similarly stupid-but-not-vulgar lyrics, I think this would be a great disc to spin for a laugh from time to time.  As it is, I simply can't find a reason I would ever recommend this album to my friends.  It is one thing to hear one of these songs intermixed into a live set with a bunch of hit cover songs that are performed well, but it's quite another thing to hear them strung back-to-back-to-back with no let up in the childishness and vulgarity.

Rating:  Musically I would crank this to a solid 8...seriously.  But as a whole, I would turn this down to a 4.

Posted by arttieTHE1manparty at 9:48 PM