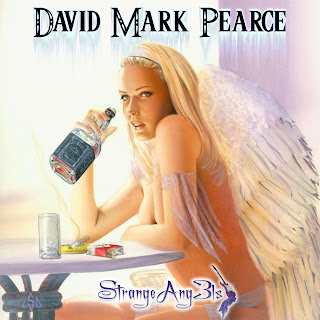 David Mark Pearce is a modern guitar virtuoso along the lines of Yngwie Malmsteen, Richie Blackmore, Adrian Vandenberg, and others of the melodic hard rock genre, although he brings more AOR sensibility to his music, utilizing keyboards more strongly and mixing his brand melodic hard rock with some subtle progressive overtones, as well.  That being said, as soon as the opening guitar riff kicks in on  "Alone I Cry", there is no doubt about the Malmsteen influence on Pearce's songwriting and performance.  This influence is expanded upon by the addition of Göran Edman on vocals, as he has performed on multiple albums with Malmsteen.  Of course, Edman is not the only big name that Pearce has recruited for this album, as the other lead vocalist is no slouch, either, as many will recognize John Payne's voice, if not his name, as the frontman for Asia.  Additionally, Oliver Wakeman the former keyboardist for Yes, adds his musical talent to this release to really ramp up the star, and musical, power.

One thing that is frequently a hazard on quasi-"super-groups" such as this one is that the sound will become less focused and the intent of the music gets lost.  While it's interesting to me that when Payne steps to the microphone, the music tends to take on a more Asia-like progressive quality, while when Edman is at the mic, we get more straight ahead melodic rock, this does not lead to a disjointed album at all.  Pearce and his guitar are the focal point of all these tracks, regardless of the talent he has surrounded himself with, and the collection is cohesive with the songs all working well with each other, flowing smoothly from track to track.

Regardless of the people he brought on board, the real highlight here is the instrumental, "Every Time It Rains".  This is a powerful piece with mutliple Pearce solos ripping throughout.  On this particular effort, Pearce sounds more akin to Satriani than Malmsteen, preferring to tell a story with his guitar rather than simply shred up a piece of classical music.

The title track, "Strange Ang3ls" is another instance when Pearce wears his Malmsteen influence on his sleeve, and with Edman on the vocals here, you would swear this track could have come from either Malmsteen's Eclipse or Fire And Ice albums.  The following track, "To Live Again" comes off as more of a classic rock song, albeit with a bit more flair on the opening guitar line and the solo contained within.  Following this is Payne's shining moment, for my money, as "Save Your Prayers" is a great mid-tempo number with, once again, more of a classic rock feel to the chorus but again featuring some excellent guitarwork and enough keyboard work to keep the listener interested without over-fluffing the piece.

Pearce's performance throughout the album is very tight, very precise, with each note being clear and distinct, each seeming to have a specific purpose in these songs. When he goes on a run, it is not simply for speed's sake; there is a reason for that particular burst of speed.  Likewise, when he chooses to slow things down, such as on "Eden Is Burning", he does so with melodic intent, giving the song a chance to display its power, not simply dragging the song down to a plodding pace and seemingly dragging the song out interminably.

While this is his debut album, I have been told there is a Pearce EP floating around out there, and trust me when I say I am going to track it down.  Anyone who is a fan of classic melodic hard rock, or any of the guitarists mentioned in this review, would do themselves a large favor by picking up Strange Ang3ls.  This is an excellent slice of melodic rock, as is usually the case with most AOR Heaven Records releases.