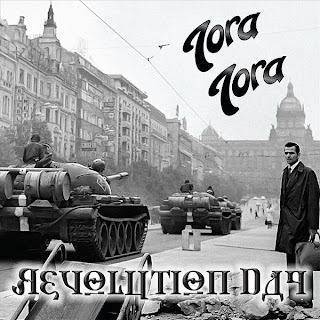 The long lost/buried/unreleased third Tora Tora album has finally "officially" surfaced and has seen the light of day via the FnA Records label.  This is the same label that has also released three discs of Tora Tora demos and unreleased material, all of which have some average to excellent material on them, but they struck the mother lode with this album.

Revolution Day has not exactly been unheard prior to this.  While there are no official statistics, obviously, I would have to say that Revolution Day is one of the most circulated bootlegs out there, both on file-sharing sites and among tape/CD traders.  I'm not going to lie...I have had a bootleg copy for several years now, as it was sent to me in a batch of real demos that I had purchased off of eBay.  Since it seemed highly unlikely it would ever see the light of day, I was pretty glad to have it.  But, to continue with my honesty...I didn't like the album.  In fact, I would go so far as to say I nearly hated it.

For one, the production on the copies floating around is terrible.  Most sound like copies of copies of a tape.  In fact, I read a quote somewhere from the guitar player, Keith Douglas, who says that is exactly what is out there...and the tapes are played too fast, to boot!  The stuff floating around has not been properly mixed or produced and is truly inferior to this, the official, band-endorsed release...and some versions are missing songs!

Once I got this REAL version in hand, that piece of crap bootleg went straight into the trash.  The comparisons are pretty much night and day.  The production and mix on the FnA version are crisp and clean and give new life to these songs.  It is easy to hear, however, why these songs remained shelved for so many years, as they had NOTHING to do with the musical landscape of the time of their recording in 1993.  Grunge had destroyed rock radio and MTV, and dance-pop and boy bands were dominating Top 40 radio, so there was nowhere for a hard rocking, southern-tinged hair band to go.

From the opening song to the last, this is the obvious progression of where this band was headed from day one.  Revolution Day picks up right where Wild America left off, with the opening acoustic guitar and harmonica giving something of a Zeppelin-meets-Tesla vibe to the rocking mid-tempo title track.   "Mississippi Voodoo Child" sounds exactly like the swampy title would have you believe, very southern rock sounding vibe, with a ZZ Top-ish guitar lick and a blues-boogie rhythm that pushes this song along.   "Candle And The Stone" is a Tesla-ish styled ballad that works very well with Corder's vocals.  "Blues Come Home To You" is, as you would expect, a very blues-based rocker which feels similar to some of the Black Crowes' material; while good, it's not quite up to par with the rest of the album, at least for me.  "Time And The Tide" is another acoustic-based rocker that is also pretty solid but seems to be lacking the punch of the rest of the disc's material.

"Shelter From The Rain" returns to stronger material and heads back into ballad territory and, once again, to Tesla-esque territory.  Sure, the vocal similarities are obvious, but even the writing style is so similar it is uncanny.  I am NOT accusing Tora Tora of ripping off Tesla, by the way, as anyone who heard older Tora Tora could tell this was the direction the band was headed.  It's just interesting to me that Tora Tora finished up sounding a lot like Tesla started out (and continues) sounding like.  "Living A World Away" cranks the tempo back up a bit and dirties up the guitar sound, before "Rescue Me" once again slips down a gear.  This would be my one complaint, in all honesty...this disc spends a little too much time exploring the slower mid-tempo to full-on ballad areas and not enough time going balls-out on blues-rockers like "Memphis Soul" (complete with a horn section) or the stellar album closer, "Out Of The Storm".  Even a couple more boogie-woogie tracks like "Little Texas" would help even this disc out a bit.

Overall, this is not a bad album at all.  In fact, I enjoy it a lot, especially now that I have had the chance to hear the songs as they were intended.  That being said, I can't honestly say that, despite their similarities, I would rate this album above anything Tesla has done, or even above Wild America.  There is simply too much down-tempo material to have to wade through.

Rating:  Rock this one to 6.5 and throw away any of the crappy bootlegs of this disc you may have...the real deal is FAR superior!

Back To Reviews Index
Posted by arttieTHE1manparty at 4:13 PM