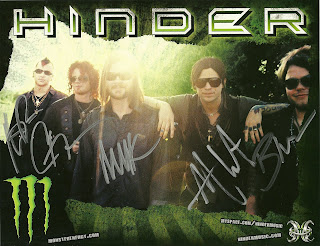 NebraskaLand Days 6/25/2011
It was an awesome show tonight, featuring

Hinder with opening act, My Darkest Days.  Granted, MDD is a bit more modern than the bands I tend to review here, but I think Hinder is a perfect fit for this site, as I consider them to be a modern version of so many of the bands that populate these reviews, and they are, hands-down, my favorite band of the current crop of American modern hard rockers.  Anyway...
The night for my wife and I started at about 5:30 or so with a meet-and-greet with Hinder.  We had ZERO business being there, but my brother is on the NebraskaLand Days board and pulled some strings for us!  (Thanks, bro!)  We sat around in the back area for a while, watching the guys from My Darkest Days do some interviews while they were eating their pre-show meal.  We didn't want to bother them while they were doing their thing, so we just hung out, waiting for the meet-and-greet.
It was a pretty short wait and we were ushered into a tent where the band was set up at a long table.  A stack of 8 x 10's was sitting there, and each band member had a pen, so the process was pretty mechanical.  Each member would shake your hand, tell you "hi" or "thanks for coming" or something similar, sign the photo (see above), and then shift it down to the next guy.  I talked VERY briefly with Austin Winkler, the lead singer, telling him we saw them previously in Omaha, opening for Motley Crue.  My wife quickly chimed in that Hinder blew Motley off the stage, which got a couple of laughs.  Winkler then called my wife "babe", which pretty much relegated me to second-class citizen status for the rest of the night! 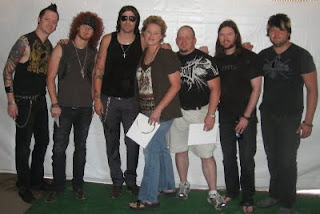 After everyone had gone through and gotten their autographed photos, the band lined up to have pictures taken.  That's my wife cozying up to Austin Winkler...I'm just trying to be included in the shot!  Talk about feeling short!  It's bad enough when your wife is taller than you, but I think I was the shortest guy in the room!!!  We left to eat with friends then came back for the show, which started at 8:00 sharp.

I am not familiar enough with My Darkest Days to remember all of the songs that they performed, but I do remember several, all of which come from their current, self-titled album.  Included in the set were:

I think they played a total of about 8 or 9 songs, but none drew the crowd reaction that "Porn Star Dancing" did, as it was obvious everyone knew this song, regardless of if they knew the band or not.  Again, MDD is quite a bit more modern in sound than the typical band I review, but I can tell you these guys pulled off a very good live sound, with solid vocal harmonies and some great guitar work courtesly of Sal Costa (at right with my wife, her cousin, Monti, and friend...).  The lead singer also has a KILLER metal scream when he chooses to unleash it.

After a short intermission filled with Bon Jovi, Skid Row, and Aerosmith songs, Hinder took the stage to a major roar from the crowd.  I was

fairly suprised that the band spent so much time on their new material from All-American Nightmare, as sales for that album have not been what the previous two releases were, and many of the songs were not as familiar to the crowd of about 5500 to 6000.  For those of us, including myself, who knew all the new stuff as well, it was great to hear so much new material included!  The set-list was:

The encore was a bit short, and I was very suprised that songs like "Homecoming Queen", "Loaded & Alone", "Take It To The Limit", and "Without You" were not included in the set, but as it was, Hinder was on stage for just over 90 minutes.  Bad weather was starting to move in, as what had started as a warm, sunny day was completely cloudy by the time Hinder hit the stage, so perhaps this caused a song or two to be eliminated.  Regardless, the band did not disappoint, with Winkler doing his best take on Steven Tyler of Aerosmith throughout the night, getting the crowd completely worked up and into every song.  Multiple songs included some form of crowd participation, especially "Up All Night", "Hey, Ho" and "Get Stoned".  The band seemed to genuinely be enjoying themselves on the last stop on the current leg of their tour (at least according to their tour shirts).  The band was sharp and very energetic throughout, especially on the heavier material from the new album, which sounds excellent live.  My only complaint would be that I don't know if the band is used to playing smaller (10,000 max. capacity) outdoor venues, as their sound was almost too loud for the arena at times and some of the instruments got lost behind the drums and Winkler's vocals, especially on the hardest rockers.
All in all, it was an excellent show with great performances by both bands.  Three of the five members of My Darkest Days came out afterwards for pictures and an impromptu meet-and-greet with people who hung around after the Hinder show; this is actually where the above picture of my wife and Sal from MDD was taken.  I would STRONGLY encourage anyone who has the opportunity to see Hinder live and to pick up All-American Nightmare if they have not yet done so.  My Darkest Days is also a great bunch of guys that put on a very entertaining and musically proficient set.  They are a bit too keyboard-heavy for my usual tastes, and again, more modern than most stuff reviewed here, but great performers who acquaint themselves with their audience very quickly.

Kudos to the NebraskaLand Days staff for bringing in two popular, current artists who tore up the Wild West Arena! 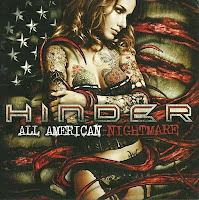 Posted by arttieTHE1manparty at 2:31 PM