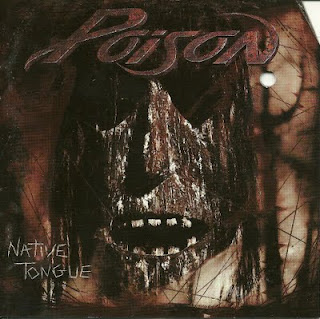 I am going to say something that many people in the Poison fanclub would consider sacrilege:  I think Native Tongue is the band's most creative, most artistic album and quite possibly the highlight of their catalog.  That is not to say I don't like other, earlier albums, as I think Look What The Cat Dragged In and Open Up And Say...Ahh! are two of the definitive glam metal albums of the 80's and both include some of the band's best songs, at least as far as the party hearty lifestyle they lived at the time go.  But Native Tongue finds the band growing up and expanding their sound by using the old addition through subtraction method; they added to their sound and their creativity by cutting C.C. DeVille loose and bringing in Richie Kotzen.

Whether people willingly acknowledge it or not, it was never a secret that DeVille was something of a one-trick-pony on guitar and was generally considered the weakest-link in the band, which is somewhat humorous as it is not like the band has ever been composed of virtuosos.  However, the changes in the band were glaringly obvious once Kotzen plugged in, and to Poison's credit, rather than try to forge on with the same-old-same-old, they adapted their style and sound to allow themselves to expand and mature.  And, with a small number of exceptions, this works incredibly well.

After starting off with a tribal drum intro on "Native Tongue", the band kicks right into "The Scream", and the guitar upgrade is immediately evident as Kotzen shows off skills that DeVille has never had in his toolbox.  This is a very good, hard rocking track that would have been a monstrous opener for arena tours if such things were still possible for hairbands in 1993.  I found it a bit odd that Poison chose to go for a ballad so early on the album, but by track 3 we hit the major single release from this disc, with "Stand", complete with its church choir backing vocals.  Lyrically, this song picks up where "Something To Believe In" left off, albeit to even bigger effect (if not chart positioning), as it was written following the L.A. riots.   This is just the first of several ballads on this disc, with "Until You Suffer Some (Fire And Ice)" being, in my opinion, the strongest.  Once again, the bluesy tones that Kotzen brings to the table, mixed in with the Hammond organ, gives this song an altogether different feel than anything Poison had previously attempted.  "Theater Of The Soul" is another strong ballad that has a feel that is very similar to "Something To Believe In".
There are several rockers here, also, lest you believe this is nothing but a slow-dance soundtrack.  "Stay Alive" is a nice up-tempo number, as are "Body Talk" and "Bring It Home".  "Strike Up The Band", once you are past the intro, has the listener feeling like they have heard this before, as it bears at least a passing resemblence to "Ride The Wind", but rocks a little...dirtier.

Some songs are a bit odd to hear, at least for me.  "7 Days Over You" is a good song, but the horn section seems a bit out of place for a Poison song.  "Richie's Acoustic Thang" is, as the name suggests, an acoustic instrumental that I could do without.

For me, the last two tracks are a pair of the best, with "Blind Faith" and "Bastard Son Of A Thousand Blues" both being excellent up-tempo numbers that show Poison flexing its muscle in two different ways.  "Blind Faith" sounds like so many other Poison hard rocking hits, while "Bastard Son..." showcases the blues-rock feel of this incarnation of the band as Bret busts out his harmonica to assist on Richie's guitar-and-piano blues romp that shows exactly what was great about this new pairing.

Unfortuanately, Richie apparently had problems scoring chicks of his own and was kicked out of the band after being caught sleeping with another member's girlfriend.  As such, this proved to be the only release with Richie on it, which is too bad because this new style and sound worked incredibly well and gave Poison a chance to grow beyond the hairband label they had so rightfully earned.  Artistically, this is the best album of Poison's catalog (followed by Crack A Smile which is, ironically, another non-C.C. album...), and it is well worth picking up.  The same can be said for nearly any project Kotzen lends his incredible talent to, by the way, so hunt his stuff down also, but be prepared to pay a pretty penny for it, as most of his stuff comes in as Japanese imports.