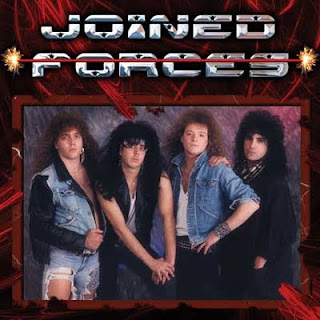 Look closely at the picture above...does that band look familiar?  If so, you are a TRUE child of the 1980's and some obscure movies!  This band, Joined Forces, was featured in the movie Light Of Day, which starred Joan Jett and Michael J. Fox (I think it was in 1986 or 1987).  Remember that one?  I actually went back and looked it up because I honestly didn't remember...but it is true.

Joined Forces is yet another in a long line of great bands that for one reason or another didn't quite make it.  Sure, making it into a major production movie could be considered "making it" for most bands, but Joined Forces really should have been a staple on rock and even Top 40 radio had things worked out correctly.  This is not just some cover band that put out a handful of originals.  This is a band that toured with Jett and recorded some excellent hair metal/melodic hard rock that begs to be heard, even if it is about 20 years after the fact.

While the band did manage to release one 5 song EP in 1985, shortly before the movie, it is pretty much impossible to find now (the album is called Show And Tell) and is on vinyl only, I believe.  There are bootleg CD's floating around out there, including some pretty professional looking ones (I bought one), but even these are not remastered or cleaned up.

Enter Retrospect Records.  I am not sure where they find these bands or the material, but Retrospect Records is quite possibly THE label when it comes to releasing old, unsigned bands and getting their music to the fans.  The Joined Forces release is not only professionally recorded and remastered, it features 10 songs recorded between 1986 and 1989, none of which are on the EP, which makes this a true gem of a release.

Musically, people are going to immediately draw lines of similarity between Joined Forces and Y&T with hints of Whitesnake, solo Hagar, and Rough Cutt thrown in.  The guitar wizardry of Jimi Bell on this album is amazing, especially with solos like the one he unleashes on the mid-tempo rocker, "Alone Tonight", and it instantly becomes obvious why James Christian pulled him into the House Of Lords fold.  "The Wild Side" is a great track that slowly builds from the intro into a bottom-heavy rocker that really showcases Livio's powerful tenor vocals and yet another scorching solo.  "Sad Boy Blues", with its slide guitar intro and bluesy stomp, will make a lot of people think of the style of early Tora Tora or Tangier, but the vocals fall more in line with Sammy Hagar, as does the rocking "Don't Get Me Started" which sounds like it could have come from Sammy's VOA album.  "Johnny's On The Bad Side" is interesting as there is really no chorus except for a group shouted "Johnny's on the bad side!" at a couple of points in the song.  It's a really different approach, but Joined Forces makes it work.

Not every track is a winner or holds up as well through the lens of time.  "Taste My Honey" is ridiculously cheesey in its lyrics, although it has a nice beat and a catchy hook.  "Angel (I Wanna Fly)" is an okay acoustic-based ballad but lacks that big power chord to make it a huge hit, and "One More Time" is an attempt at a more radio-friendly ballad but is a pretty unremarkable song overall, falling a bit flat as the band seems to struggle with trying to sound like Journey musically but with subpar material.

The more I listen to this release, the more I find myself comparing it to a Sammy Hagar and Y&T collision, which is a really good thing.  Excellent guitar work, powerhouse vocals, and mostly above average songwriting really leaves me wondering how things went so wrong for this band after such big-time exposure.  This is one album that is very much worth tracking down.  I find it hard to believe fans of any of the bands I used for comparison will not find themselves loving this disc immediately.

Rating:  Crank this unearthed gem to 7!

You can check up on the band on their Facebook page.
Back To Reviews Index
Posted by arttieTHE1manparty at 2:56 PM