SHOUT "It Won't Be Long/In Your Face" 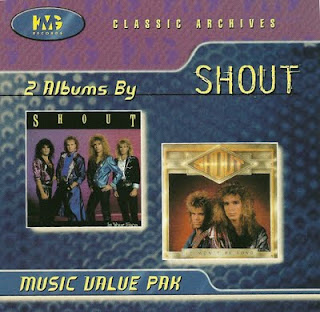 Shout is easily one of the best bands of the Christian hair metal scene, and is a fantastically talented band, Christian or not.  Ken Tamplin's vocals are exceptionally powerful with a full range, and his guitar playing is top notch as well.  Chuck King is also a very accomplished guitar player in his own right.  The tricky thing with this band is...no one knows for sure who played what when.  I have never found it clarified anywhere who did the leads and who did the rhythm tracks on either album.  I have heard that Tamplin plays the majority of the rhythm tracks with King playing the leads.  However, I have also heard that Lanny Cordolla actually played the leads on the It Won't Be Long album, and that King was added as part of the touring band afterward and was thusly credited.  There is also some question as to which drummer played on the albums, but this is the best information I could find.  Regardless of who is playing, one thing is certain:  if you have never heard Shout, you need to.

The first 9 tracks on this 2-on-1 compilation comprise the It Won't Be Long album.  This is the more melodic of the two with a bit more shine on the production.  The band is at its best on these tracks when they are in full-on rocking mode, such as on "Winners Or Losers", "Shout", and "Showdown".  "Never Stop" is another good up-tempo rocker but there is too much keyboard for me.  This is not to say the ballads are bad, as I think "Find A Way" is a very nicely performed track, but, again, the keyboards are too out front for me and it comes off as a bit too sugary for my taste.  "Timeless Love" is a bit more mid-tempo but still not a full-blown rocker; the same can be said of the title track, which is the better of the two.

Tracks 10-19 make up MOST of the In Your Face album.  I say most because the album's original closing track is not included on this 2-on-1 collection.  Nevertheless, this is the more powerful of the two album, with a bit grittier production, a bit less keyboard, and a LOT more guitar!  Just take a look at the additional musicians I listed above and take in the fact that ALL of those guys performed on the title track!  Yes, Ken Tamplin has some friends in the business and he managed to get all of these folks to contribute to a Christian metal album at a time when a lot of people were not willing to "out" themselves as Christians.  This song SMOKES and is worth tracking down this disc all by itself.  However, it is far from the only good song here, as "Borderline", "When The Love Is Gone", "Gettin' Ready", and especially the powerful "Faith, Hope, and Love" are all exceptional rockers that deserve your attention and inclusion in your collection.  The instrumental "Moonlight Sonata (in 32nd Notes)" is exactly what it says it is, and it features some lightning fast playing.  The ballads here are a bit less-saccharine, but they still pale in comparison to the blistering hard rock this band is capable of unleashing when they are going full-force.

I chose to review this 2-on-1 compilation because it is far easier to come by than either album by themselves, as both are long out of print.  I have read that In Your Face did sell more than 200,000 copies, so there are possibly some floating around out there for you to snag if you are lucky, but you are likely to pay a pretty penny for it.  In all honesty, you will most likely pay a decent amount for either of these albums, and even this crappy KMG compilation is out of print.  Oh, did I say crappy?  Yep.  I bought this so I wouldn't have to risk scratching my originals, so it is good for that.  However, as is the case with KMG's releases, the inserts are garbage, with no band notes, no line-ups, no lyrics, and no pictures.  Some people will also be frustrated by the omission of a song from the In Your Face album.  Still, if this is all you can find (or afford), I highly recommend you pick this up, as Shout has all the musicianship of the majority of their peers, Christian or secular, plus they have one of the most talented-yet-unheard-of lead singers around.