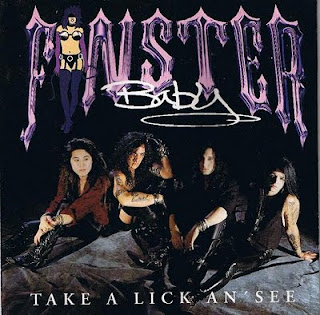 While grunge had certainly done all it could to kill off most of the hair bands by 1993, there were a handful that refused to die.  Many looked to smaller, independent labels and foreign markets to get their music out to the people.  Finster Baby was one of those...and they were certainly one of the best!

Finster Baby plays the kind of sleaze metal that fans of Guns N Roses, LA Guns, Circus Of Power, and Faster Pussycat are likely to fall in love with.  LaStat's vocals spit and snarl their way through these tracks like a seasoned veteran, despite the fact that this was the band's debut effort.  Likewise, Raia's guitar work comes screaming out of the speakers, ripping through leads and solos, while keeping the sludge factor high as far as tone and attitude goes.  One thing that this band incorporates that a lot of their peers do not is a more funky style of bass sound, which I think really works well.  It truly is hard for me to believe that this is the band's first album, and I am guessing that they spent a LOT of time working together before recording this project because they are tight and in sync with each other.

The album starts off with the high-intensity sass of "Forgot Your Name Again", an ode to pick-up lines and one-night stands.  "Somethin's Goin' On" has a funky vibe to it, but is more pure sleaze once the vocals kick in.  "Love Ain't Nothin' Without Sex" is pretty self-explanatory, as is "Get Out Of My Face". "Take A Lick An' See" is pure raunch-n-roll, and every bit as nasty as the song title implies.   "Blood Machine" is a mid-tempo thumper of a song with an angry vibe and an equally angry vocal performance.

The band does take the time to slow down on occasion.  "Johnny" is the required Skid Row-esque bad-boy-ballad, a la "18 And Life", but not quite as powerful.  "Never Promised You Tomorrow" also slows things down into acoustic-based ballad territory.  While neither of these are terrible songs, this is NOT what Finster Baby does best...not even close.  In fact, these two tracks are the weak points of an otherwise ferocious disc.

The above cover is the German import album artwork.  It is the only one I have ever owned; I have never owned the American version, but I believe the tracklisting is the same on both albums.

There was not a lot to love about the scene from about 1993 on, but Finster Baby's raunchy Take A Lick An' See is one of the true gems from that time frame.  Be prepared to pay a pretty healthy sum for this album, however, as it is LONG out of print on a tiny label.  I have seen this sell for as much as $50 on eBay, and for $60 or more for this German version.

Back To Reviews Index
Posted by arttieTHE1manparty at 10:06 AM