RATT "Out Of The Cellar" 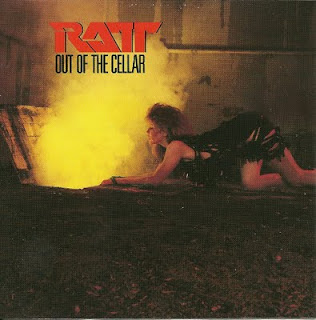 It would be vitually impossible to overstate the importance of this record.  Following the unexpected success of Quiet Riot's Metal Health album, record labels were looking for bands that could fill a similar role.  Up stepped Ratt.

Having already released an impressively popular EP on a small independent label, Ratt quickly took a couple of those older songs, mixed in several new tracks, and Out Of The Cellar was born.  Far more metallic than most of the hair metal bands that would soon follow, Ratt combined the big, twin guitar attack of DeMartini and Crosby with the gritty vocals of Pearcy, the solid rhythm section of Croucier and Blotzer, and the production wizardry of Beau Hill to forge a sound that quickly tore up the charts.  The album peaked at #7 on Billboard's album chart, eventually selling more than 4 million copies, the song "Round And Round" made it to #12 on the Hot 100, and the career of one of the founding fathers of the hair metal movement was off and running full-speed ahead.

I think it's fair to say that most people reading this review are already fully aware of the biggest hit on this disc.  Not only did "Round And Round" hit #12 on the Hot 100, it also reached #4 on the Mainstream Rock charts.  Many people, however, are not aware that "Wanted Man" also managed to crack the Hot 100, reaching #87 (#38 on the Mainstream Rock chart), and that "Back For More", which I think is far and away the best song this band has ever released, topped out at #27 on the Mainstream Rock chart as well.  Outside of these songs, though, a lot of people probably don't hear much from this album now unless they intentionally dig it out from time to time.  I would encourage people to do just that, as it is easy to forget this disc's greatness with the glut of new music that becomes available on an almost daily basis.  Classics like "You're In Trouble", "Lack Of Communication", "In Your Direction", and the ultra-sleazy "Scene Of The Crime" are true gems of the genre.  There are a couple of lesser songs on this masterpiece, as I have never been a big fan of "She Wants Money" or "I'm Insane", but neither one is necessarily worthy of the skip button, either.

While history lessons really aren't necessary, I think it is fair to say that, at least on a commercial and financial success level, Jake E. Lee, Chris Hager, Matt Thorr, and Dave Alford probably all wish they had stayed in Ratt and not jumped ship to form Rough Cutt with Paul Shortino.  I could be wrong...but I doubt it.  Ratt has gone on to sell millions and millions of albums, travel the world, and perform in front of millions of fans.  Rough Cutt...???  Well, Shortino does sound good with King Kobra now!

For most, this is where Ratt & Roll started, and Out Of The Cellar is a difficult one to top.  It is an absolutely essential album for any hair metal or sleaze metal fan, and I would dare say it belongs in ANY true heavy metal fan's collection. 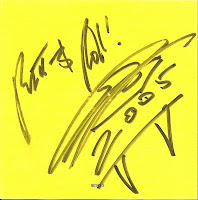 I'm lucky enough to have an autographed copy...
(that DOES say Stephen Pearcy, right....???)

Rating:  Crank this classic to 9!

Posted by arttieTHE1manparty at 10:14 AM