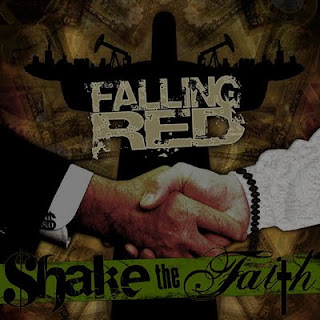 Is this 1989 or 2011?  That was the question I jokingly asked myself when I popped Shake The Faith in to review it.  To say that these guys have one foot frirmly planted in the 80's Sunset Strip, with the other in today's modern production, would be the first way to accurately describe he sound of this band and disc.

This CD just drips with sludge from the very first note of "How You Feel (On Me)", complete with the huge drum sound that made so many 80's albums great.  By the time the guitars snake their way into the track, it is obvious these guys have done their sleazy homework, paying homage to GnR, LA Guns, Faster Pussycat, and the rest of the quality sleaze acts of that era.  The same can be said of Rozey's snarl, which has enough lip curl and snarl to make it clear that these guys are not faking this stuff...this is exactly the sound they are after and this decadent sound is the life that they live.

With no slowing down on this album, "Thrive" keeps the album kicking along, with more gritty, sleazy guitar work and pounding drums driving the track.  "Out Of Control" has a bit more bottom end than the other songs and carries a punk attitude along with the big, bouncy drum sound and the chugga-chugga of the rhythm guitar.   "Immoral Heights of a Lowlife"...how can you not chuckle at a title like that...may be my favorite track on the disc, ripping into a blistering pace with leads ripping over the top of the rhythm and bass guitar right from the opening note.  The title track, and album closer, may be the strongest of all the material here with its hook-filled, driving tempo, churning guitars, and pounding rhythm section, and a catchy-yet-simple chorus.

All is not 100% perfect...but nothing is terrible.  "You Were Out To Get Me" has a bit of a "heard this before" feel to it, and is easily the most radio-friendly track here, although Rozey's vocals aren't exactly Top 40 material.  It's a good track, just not quite as filthy as the rest of the material here.  "Sue You For Your Soul" is another high-speed rocker, but the production seems a bit muddy to my ears.  "No Good, So Wrong, So Right" has a semi-annoying intro that I could live without, but that doesn't kill the song outright.  Honestly though, those are really my only complaints other than the fact that the disc is very short, clocking in at just 30 minutes over these eight tracks; I would have LOVED to have another song or two added to this disc.

This CD is not earth-shattering, as, like I said, there is something extremely familiar about its feel.  However, it doesn't sound dated or like every other album you have heard before, either.  The band is energetic and obviously love what they are doing...and they do it well.  Here's hoping that these guys continue to crank out this style of music and don't bend to the trends that shape rock radio today.  Rocksector Records has potential stars on their hands here...let's hope they keep them pointed in this favorable direction!

Return to Reviews Index
Posted by arttieTHE1manparty at 5:10 PM