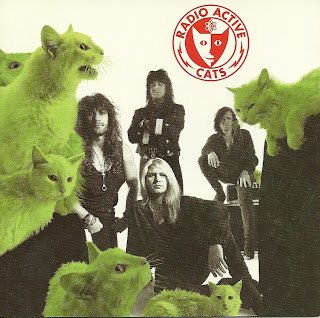 Bands...let this be a warning.  If you give yourself a ridiculous name like the Radio Active Cats THIS is the kind of album artwork you must expect.  I mean, c'mon...what else could Warner Bros. do?!   Anyway...

Radio Active Cats are NOT a prototypical hairband, regardless of their appearance on this album cover.  In fact, they have far more in common with bands like the Stray Cats than they do with, say, Firehouse or Warrant; think Stray Cats mixed with a bit of the bluesy vibe Great White made famous, along with a hint of 70's glam and you have the Radio Active Cats.  "Hard-rockabilly" is how I described them to a friend of mine once, and I think the label still fits.  Slide guitar, stand-up bass, mandolin...and electric guitar...what a combination!  It is a given that Radio Active Cats don't sound like anything you have probably heard before.

As for the songs themselves, standouts would have to include the sleazy sounding "Finger In The Pie", the hard rocking "Love Razor", and the mandolin-tinged power ballad, "Think About Love".  "Cry On My Shoulder" is another good hard-rocking shuffle tune.  "Wet, Hot Sweat" is easily the best track on the disc, for me, and is a great, hard-rocking song with dirty, sleazy lyrics.  "Standin' In The Rain" is another excellent, driving hard rock song that I personally think should have been the album opener. An album full of songs of the caliber of these last two tracks I mentioned would have been killer!

A few songs come up pretty short for me, however.  Album opener "Shotgun Shack" is simply TOO rockabilly for my tastes and nearly led to me not listening any further.  "Cheap Mascara" has the potential to be the hardest rocker on the disc, but as soon as the shuffle kicks in, the song fails to deliver on its potential.  "Knock, Knock" is nothing but filler and is relatively boring.  "Hold On Tight" is relatively blah with very average lyrics, and "Bed Of Roses" is nothing particularly special, either.

I am betting that these guys put on a killer live show, as you can definitely hear the energy in their performances.  In my opinion, if the track order was altered, this would be an above average album.  However, it takes some skipping around to find the good songs, and the opening two tracks probably deterred a lot of people from digging any deeper.  There is a very solid EP's worth of material here, and if you cut out the worst two tracks here, you would still have 9 average to above-average songs with a different sound and vibe that could have won over a nice fan base.

As a side note to those who find this disc and like it:  I have read in several places that this band later changed their name to TV In Flames and recoreded at least one album under that name.  Also, if you do track down this CD in its original form, which I have been told is pretty hard to do, the tray case is as green as the cats on the cover. Apparently this version is pretty collectible...I do not have it; my jewel case tray is black.

Rating:  Like a Tootsie Pop, the good stuff on this album is in the middle, so skip the first couple of stinkers and rock this at 6.