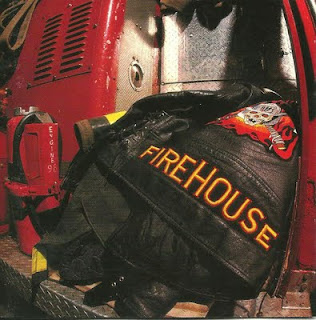 (c) 1992 Epic Records
CJ Snare--Vocals, Keyboards
Bill Leverty--Guitars, Backing Vocals
Perry Richardson--Bass, Backing Vocals
Michael Foster--Drums, Backing Vocals
Hold Your Fire is one of the very last hair metal albums to have any true impact, as grunge was already starting to make itself felt by the time this album really got things rolling.  In fact, at the 1992 American Music Awards, Firehouse beat out Nirvana and Alice In Chains for best new hard rock band.  Something of a last hurrah for the hair metal scene, to be sure.
These North Carolina boys had already made some noise with their debut, self-titled album, but I have always preferred this album, their second, as it is cosiderably heavier in places while still maintaining the cathcy, pop-oriented hooks that drove the first album to multi-platimum status.  Nowhere is this more evident than on the smoking album opener and lead single "Reach For The Sky", follow-up track, "Rock You Tonight", and the title cut "Hold Your Fire".  While the band will never be mistaken for Megadeth or Metallica, they certainly show that despite their pretty boy looks with massive hair, leather jackets and cowboy boots, they can rock out with the best of the hair genre.  "Life In The Real World" is another rocker that, while not quite as punchy as the others mentioned here, definitely leans more toward the hard rocking side than many of the other slickly produced, radio-friendly up-temp numbers here.
The sassy "Sleeping With You", the third single released from this album, was more in-line with the first album, featuring a more pop-flavored hook but still infused with plenty of guitar and pulse-pounding drums to keep the hard rock fans satisfied.  "Mama Didn't Raise No Fool" has a boogie feel to the hook which even the most devoted rocker will likely find themselves tapping their foot to.  "Get In Touch" follows a similar formula, as does the cutesy "You're Too Bad (For Your Own Damn Good)", both of which employ a snappy hook, a short but sweet solo, and Snare's vocal antics to their maximum value.   Again, these are not bad songs by any stretch, and they certainly packed more punch than some of the hyper-watered-down clone rock that had stagnated radio by this point, kicking open the door for the harder, darker grunge that would soon consume the airwaves.
Of course, Firehouse is probably best known for their big power ballads, and this album features a couple.  Chief among the ballads here is, of course, the Top 10 hit, "When I Look Into Your Eyes", but album closer, "Hold The Dream" is actually my favorite the band has done, featuring CJ's distinct, soaring voice, layered vocals on the chorus, a little bass fill about halfway through, and both acoustic and electric guitars throughout.  I think that the fact that this song sneaks past the 5 minute mark is what kept it from being released as a single as well.
Firehouse is a band that simply got caught up in a storm that even their massive popularity couldn't weather here in the United States.  Despite being the last hair metal act to chart in the Top 20 without changing their sound ("I Live My Life For You" from 3 reached Billboard #20), the band opted out of their record deal in America and signed with a Japanese label.  As such, they continued to record and tour, primarily in Asia and specifically in Japan where they maintained a large following and recorded their live album.  Through it all, Firehouse has remained Firehouse, and this remains their hardest hitting, if not top-selling album.
Rating:  Crank this to 9 and wonder what might have been if not for grunge....

Back To Reviews Index
Posted by arttieTHE1manparty at 4:43 PM