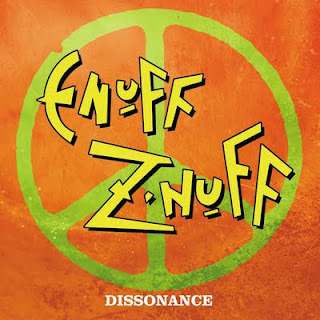 A couple of MAJOR things should be noted about the latest release from trippy glamsters Enuff Z'Nuff.  First off, band co-founder, Donnie Vie has returned to the fold and his vocal presence is IMMEDIATELY obvious.  But perhaps even more interesting is the addition of Jake E. Lee as the band's second guitarist.  Yes...Jake E. Lee, as in Badlands founder, former Ozzy guitarist...that Jake E. Lee.  His presence is also felt instantly as his grittier guitar sound is a unique addition to this Beatles-on-steroids sounding band.

From the opening notes of the title track, it is apparent that this is more in-line with the original Enuff Z'Nuff than the Vie-less efforts of the past several years.  "Lazy Dazy" and "Rollaway" both contain that real Beatlesque vibe that the band has long been famous for, and they do not disappoint here.  "Lazy Dazy" features a jangly mid-section that has that quirky vibe that Enuff Z'Nuff displays so frequently, while Donnie's voice is particularly strong on "Rollaway", especially on the airy chorus, and Chip's bass lines carry the song.  "High" is one of the hardest rocking tunes here, and Jake E. Lee gets to stretch his legs a bit on this track.  "Sometimes" is more laid-back and in that mid-tempo groove that Enuff Z'Nuff treads so frequently, complete with the ringing guitars and layered harmonies.  "Playground" is a killer track that sounds like it is the theme song from some 60's or 70's crime drama, which I love, but the lyrics are definitely not from that decidedly G-rated era with a chorus of "Lay down, I'll make your body my playground...open your lily-white legs, now..."!

Quite possibly the moment of the record is "Joni Lynn" which is an autobiographical account of Donnie's failed marriage.  The pain and bitterness is obvious in Donnie's voice, and the song has a definite power melody to it that keeps drawing the listener back for repeated spins.  Again, Lee adds a solid, if understated, solo to the song, giving it a bit of a punch, and Chip and Vinnie keep the entire band exceptionally tight on this song.  Definitely not a shiny-happy feeling coming from this track, but it is definitely a gritty song that I'm certain was written as a piece of cathartic musical therapy and turned into the most powerful song on this disc.

"Chicago" is also a very dark-sounding track right from the start and features Chip taking a turn at lead vocals.  Something about the song feels almost haunting in the way it is delivered.  Perhaps it is the production, or maybe it is just the way the song is performed, but it is definitely a moody piece that, while not as poppy as most Enuff Z'Nuff tunes, doesn't feel particularly out of place.

Easily the most bizarre moment on the album is the cover of the Prince mega-hit "When Doves Cry".  The bass line is modified, I'm guessing to avoid the royalties that would have to be paid for the sampling.  The song, as you might imagine, is rather dark and the funk of the Prince original (which I FAR prefer) is not present here, but the song is interesting at the very least.  I don't see this being a track which gets much, if any, live play.

Previously only available in Japan, this new version of Dissonance features two new studio outtake recordings in "Code Red" and "Run For Your Lives".  The first features a funky bassline courtesy of the returning Z'Nuff, and the traditional Enuff Z'Nuff sound is evident here.  "Run For Your Lives" has a pop-rockabilly feeling that keeps me waiting to hear Kenny Loggins belt out "I'm alright..." for the chorus.  I like this track a lot and am happy to have it included on this American repackaging.

Is this an earth-shattering release?  No, but none of Enuff Z'Nuff's albums were, although the debut and Strength are must-haves for period collections, I believe.  In fact, that was never the point with Enuff Z'Nuff who were always about catchy melodies and  that trippy, 60's vibe, set over a simplistic hard rock rhythm.  Enuff Z'Nuff is about a good time, and this album is exactly that for most of the record.  Sure, there are a couple of darker moments when raw emotions are exposed, but fans of the feel-good rock that is brought to mind with older favorites like "Good Thing", "In Crowd", and "Hot Little Summer Girl" should find plenty to love on this Chip & Donnie reunion effort.