TUFF "The History Of Tuff" 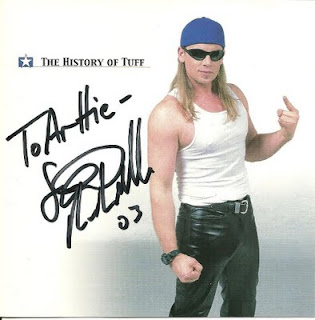 Tuff is one of the few hair metal bands that refused to lower their flag while grunge was running rampant through the 1990's, so you have to excuse Stevie Rachelle and his pals if they relish in the destruction of that genre with the HUGE satelite radio hit "American Hair Band" on this compilation album.  In case you have somehow missed this song, Stevie incorporates pretty much every major (and some minor) hair metal band into the anti-grunge lyrics he sings/shouts over the main riff of Metallica's "Sad But True".  The very first time I heard it I actually started laughing because it is just so dang catchy...and so dang TRUE!  With an opening stanza that goes:

"Kurt Cobain is gone but I'm back,
Wearing leather pants and a backwards hat
Guitars slung low, where the Down Boys go
The Night Train's back, so on with the show!"

...what's not to love?!  It just continues from there with references to Twisted Sister, Skid Row, Motley Crue, Pretty Boy Floyd, Van Halen, Hanoi Rocks, Guns N Roses, White Lion, LA Guns, Sleeze Beez, and so many more.  Simply awesome!  There are two versions included here, with a radio edit to take out some of the less-friendly language, and the slang edit where Stevie unloads both barrels on his grunge targets.

The rest of the album is made up of songs taken from previous Tuff releases.  Featured here are a couple of tracks which feature former Gunner Gilby Clarke on guitars, including a cover of "American Man" written by Gene Simmons, Jamie St. James, and Tommy Thayer.  As is true with all of Tuff's releases, both major label and independent, the strongest material is the uptempo, rocking material, and there is plenty of that here.  The best of the bunch, in my opinion, is also the oldest material, with "Good Guys Wear Black" from their 1991 debut album being one of my favorite Tuff tracks ever.  "Another Man's Gun" is a very solid tune , as is "Sinner Street" which was written in 1989.  The same can be said for "Summertime Goodbye", which was originally recorded in 1988.

Also found on this disc are a couple of tracks from Stevie's solo album, Who The Hell Am I?  For me, the most interesting inclusion here is Stevie's piano-based acoustic version of "So Many Seasons", which was originally performed by Tuff on their debut disc in a much more hard rock, power ballad form.  "I Won't Give Up", while being more of a mid-tempo number, is a nice inclusion that many fans may not have heard previously, as Stevie's solo disc is not overly available.

Stevie's voice is not one that I have ever been fond of on really slow ballads, and there are a couple included here.  "Who The Hell Am I?" is an example of a song that has just never worked for me, as Stevie seems to struggle a bit, especially on the first verse, with keeping his voice in tune.  Again, my favorites of the slow numbers would also be the older material, with "A Place Where Love Can't Go" being the best one here, as it is a big, power ballad with a really nice hook; this would have been all over radio had it not originally been released in 1992 or 1993.

All this being said, this album is all about the new single that was included, and that alone is worth the price of the disc.  This does serve as a good introduction to the band for people who may not have heard of Tuff previously, and if it induces people to track down the older, out of print material, that is just a bonus.

Ratig:  It's always Tuff (sorry, I couldn't resist) to rate "best of" compilations, but "American Hair Band" alone makes this a crank-worthy album!  Crank it at 7.5 and blast the new song while enjoying some of the old as well...